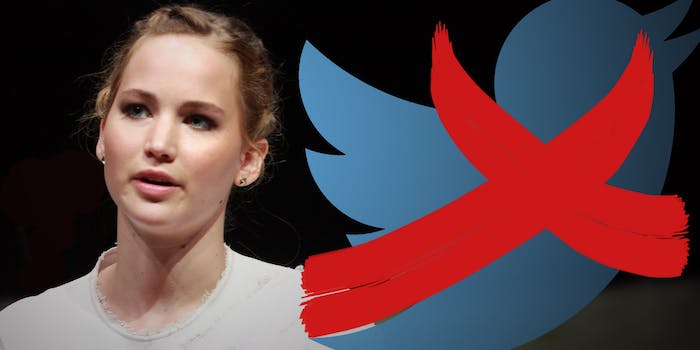 The Internet has been cruel to her. And now she's had enough.

Hollywood actress Jennifer Lawrence has vowed never to get Twitter, saying that “the Internet has scorned me so much.”

In an interview with the BBC, the 24-year-old actress said she doesn’t “really understand what [Twitter] is, it’s like this weird enigma that people talk about.”

“Because the Internet has scorned me so much,” said Lawrence, “I feel like it’s that girl in high school that I’m like ‘Oh you want to talk about her? Yeah I’ll do that.’”

Lawrence was referring to the leak of hundreds of intimate photos of dozens of female celebrities in November dubbed “Celebgate,” of which she was one of the most high-profile victims. The photos are believed to have been stolen by multiple hackers from Apple’s iCloud storage platform over a number of years, and speaking out afterwards, Lawrence described the leak as a “sex crime,” and called for a change in the law.

“It’s my body and it should be my choice, and the fact that it is not my choice is absolutely disgusting,” she told Vanity Fair. “I can’t believe we even live in that kind of world.”

Following that incident, Lawrence said we’re unlikely ever to see her on social media. “I cannot really keep up with emails so the idea of Twitter is so unthinkable to me,” she told BBC host Nick Grimshaw.