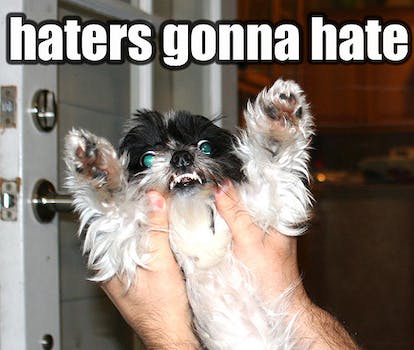 A female critic of video games gets labeled a “cancer”

Jennifer Brandes Hepler of prominent video-game studio BioWare is getting vilified for suggesting that games would be better with less killing and more dialogue.

As video games go Hollywood, with ever more complex storylines and production values, there’s a growing debate over what matters more: the game play or the story.

At ground zero of that long-raging debate this week: Jennifer Brandes Hepler, who works for video-game maker BioWare.

Hepler became the target of mass Internet ire after quotes from a 2006 interview Hepler gave resurfaced on Reddit. In the interview, she admitted she doesn’t like playing video games, but enjoys writing the storylines for them.

While that admission itself was cause enough for sensitive, self-involved gamers to pick up arms, Hepler went on to suggest that there should be a button that allows one to skip or automate combat. (Many games let you skip dialogue and other storytelling elements—the kind Hepler and her colleagues create.  The strategy video-game series Total War allows you to automate and skip combat, but this option is rare in most video games.)

Hepler theorized that this skipping option would get women more involved in video games, as it saves time and removes the violence women tend to have issues with, she said.

The video-game community on the Internet didn’t read her comments in a positive light, and proceeded to  take her words out of context and mock her.

Redditors, for example, created mean-spirited images that labeled Hepler as the “cancer” that was killing BioWare, before a moderator on Reddit stepped in and deleted the threads, writing “[Reddit] is not the place to make some random person’s life fucking miserable.”

It seemed the controversy had died down a little, until Hepler joined Twitter over the weekend, and was quickly attacked by angry gamers who had only read her words out of context.

Hepler tweeted over the weekend, “I just figure they’re jealous that I get to have both a vagina AND a games industry job, and they can’t get either.”

She was alluding to the well-documented sexism found both in the video-game industry and its products—and engaging in a little trash talk, which is part of the established culture of competitive gaming.

Twitter and 4chan’s /b/ image board went nuts with her statement. The controversy spilled over onto Tumblr. The “cancer” taunt spread far and wide, as did an obscene image purportedly of Hepler.

Others took to calling Hepler and leaving her hateful voicemail messages.

Some Internet users were quick to call the video game community’s reaction to Hepler misogynist. One response was an image comparing two women in the video game industry which contrasted Hepler’s words with quotes from game designer Ree Soesbee—the central argument of the comparison being that Soesbee said she enjoyed playing video games, and thus made for a better representative of women in video games.

Some Twitter users defended Hepler and expressed shock at the vitriolic nature of the disagreement she faced. Many even apologized to her for the masses.

BioWare studio general manager Aaryn Flynn didn’t improve the level of discourse when he began cursing at Hepler’s critics and calling them “morons” and “idiots.” Perhaps Flynn, like Hepler, thought responding to gamers’ aggressive language with similar language was a good tactic, but the hate only generated more hate.

No one is calling for Flynn to apologize, at least not en masse, so maybe such language really is par for the course in the gaming world.

The debate Hepler stirred merely by appearing on Twitter shows no signs of going away. Folks are continuing to tweet about Hepler at a rapid clip every minute.

“So much hate for @BrandesHepler. I think it’s a bit over the top, but I don’t know why you’d be in the industry and not enjoy games,”  tweeted archenosaur today.

Lost in all the cursing and misogyny, however, was Hepler’s original point: If you stick to one traditional definition of games, are you excluding potential audiences that could expand the video-gaming universe?

Hollywood is savvy about making movies that appeal to different demographics, and no one expects movie studios to only produce horror flicks or romantic comedies. Why can’t the video-game industry do the same without meeting angry resistance?

None of the noise, hate, and cursing that’s ensued helps advance the discussion. And the video-game industry can’t move forward if people shout down voices like Hepler.