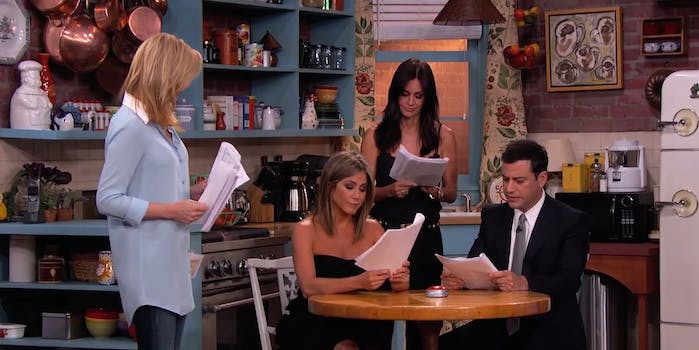 Jimmy Kimmel's a huge Friends fan and makes Jennifer Aniston play out one of his fantasies.

There hasn’t been a complete Friends reunion since the show ended 10 years ago, but that doesn’t mean people have tried for who they can get. Ellen DeGeneres tried last year, and now Jimmy Kimmel’s doing his part in making that mini-Friends reunion happen no matter what.

With Jennifer Aniston on his show, he ‘fessed up to being a huge Friends fan while breaking a cardinal rule of fandom: He told her about fanfiction. After explaining what it was, he went even further and asked her to read a scene with him all about Ross’s “love-making abilities” in a near-perfect duplicate of Monica’s apartment.

The saving grace about this entire sketch is that Kimmel (along with his writing staff) wrote the piece of fanfiction—and not an actual fanfiction writer—so Kimmel was the subject of most of the jokes and self-deprecation. And it’s hard not to get excited when Aniston’s castmates join in on the scene and act it out with them.

Even with all the jokes, things get bleak when we find out what happened to Joey and Chandler.