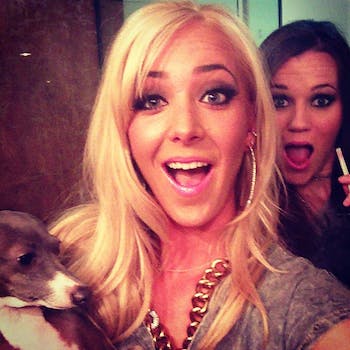 Jenna Marbles gets real, draws her life story on YouTube

"This video accidentally turned out to be kind of sad. ME SO SOWWY IT NOT POSED TO BE SAD WHO WANTS HUGS AND COOKIES?"

Jenna Marbles (real last name: Mourey) entertains millions with weekly insights and observations into her and her dogs’ lives, but her latest video gives them an entirely new perspective on the vlogger they’ve come to know.

Currently the most popular woman on YouTube—as well as the first woman to break the top 10—Mourey followed the footsteps of fellow YouTubers Shane Dawson, Smosh’s Anthony Padilla, and PewDiePie, illustrating (like, actually illustrating) an honest and personal video recap of her life.

“This video accidentally turned out to be kind of sad,” Marbles wrote in the video description. “ME SO SOWWY IT NOT POSED TO BE SAD WHO WANTS HUGS AND COOKIES?”

Using a marker and dry-erase board, Mourey uses stick figures to paint a picture of her early life with her parents and older brother. Her parents divorced when she was young, but she had a fairly carefree childhood with both sides of the family. She shows a more vulnerable side, revealing that her dad told her to switch to softball because she was “distracting the boys” and she had self-esteem issues because she didn’t feel that she was smart compared to her classmates.

She covers heartache, the uncertainty that followed receiving her master’s degree, and her eventual start on YouTube with the “How to trick people into thinking you’re good looking” video and fallout with BarstoolSports.com owner David Portnoy. (Portnoy now says he’s ready to bury the hatchet as a result of Mourey’s video. His blog post is caled)

In order to be closer to her YouTube friends, she moved to Los Angeles with her boyfriend, Max, but she was still sad over their split about four months ago.

While Marbles may put on a good face on for her videos, her life isn’t as carefree as it seems to play out on camera.

“Life is complicated and you never know what’s gonna happen, but if it’s meant to be it’ll be, and if it’s not it won’t,” she says.

Jenna might not know what she’s doing with her life, but she would rather have it that because if she had it all figured out, she would be doing it wrong and wouldn’t be able to grow.

She is certain of one thing: no matter what happens in the future, YouTube and her viewers make her happy and she’s thankful for them helping her become who she is today.

H/T: Daily of the Day | Photo via Jenna Mourey/Facebook