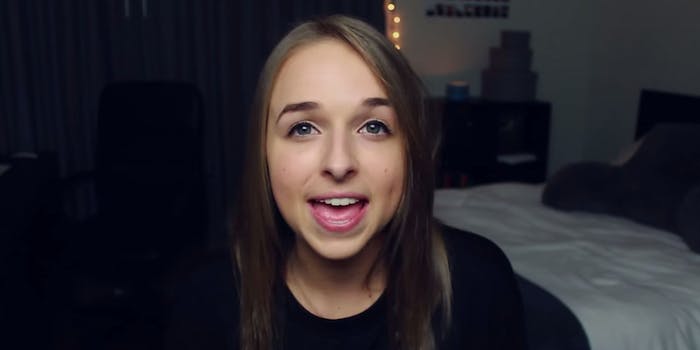 The latest YouTube star to land her own book deal is Jenn McAllister. The upstart 18-year-old, who releases vlogs on her JennxPenn YouTube channel, has landed a book deal with Scholastic.

McAllister’s book will be titled Really Professional Internet Person, and like many of the other literary works published by YouTube stars, it will be autobiographical in nature. McAllister will use everything from top 10 lists to photos to social media posts to catalog her life up to this point. It’s the sort of book McAllister’s subscribers (who are more than 1.8 million in number) will be eager to read.

By publishing McAllister’s book, Scholastic, which caters to young readers, will look to capitalize on the YouTube-to-literature trend led by imprints like Keywords Press. “Jenn has an incredible voice for teens, inspiring them to be authentic while encouraging them to not take everything so seriously,” said Scholastic VP and Publisher Debra Dorfman in a release. “Everyone knows Jenn is passionate about her videos and that same dedication is evident in her new book. We are Jenn ‘followers’ and are so glad she is now part of the Scholastic family.”

Really Professional Internet Person is just one part of McAllister’s plan to expand her presence off YouTube. Since signing a talent management in June 2014, she has also filmed a starring role in Bad Night, a feature announced at Playlist Live.

Rana Zand of Big Frame and Matt Saver of UTA negotiated the Scholastic deal on McAllister’s behalf. The book, which will retail for $14.95, is due out in paperback and ebook formats in September 2015.