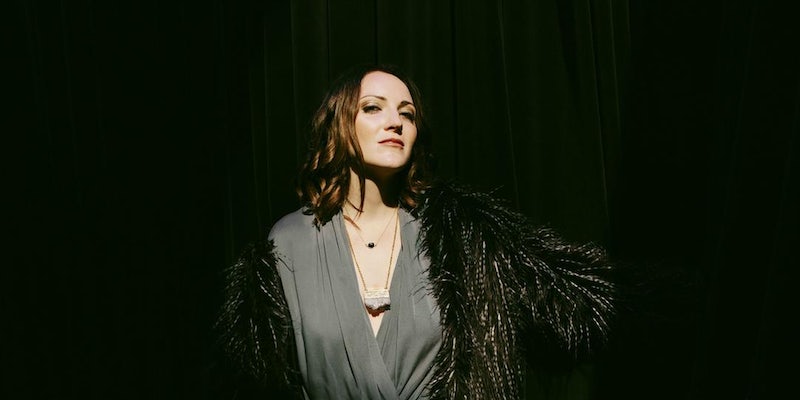 Jen Kirkman is here to be your mirror.

I’m Gonna Die Alone (And I Feel Fine), the comedian’s new Netflix standup special—which was filmed at the North Door in Austin, Texas—explores life at 40: the aftermath of divorce, the horror of weddings, being happily child-free, inadvertently being a “cougar,” finding a gray pubic hair.

Kirkman has also appeared on Drunk History and was a writer for Chelsea Lately, but the stage is where she works out the ideas swimming around in her head. (Her podcast, I Seem Fun, is another channel for her stream-of-consciousness communiqués.) The new special is an extension of her 2013 book, I Can Barely Take Care of Myself, and, to a degree, her 2011 special, Hail to the Freaks. There’s no anger as she discusses friends’ parenting issues or being left out of a couples’ dinner; instead, she zeroes in on the sociology of these situations.

We asked Kirkman about the process of working out all those ideas, from brain to stage.

How did the material for this special come together? I’m assuming it happened over a couple of years?

Yeah, I did some comedy albums years ago, and there’s a couple bits that are even on one of my old albums. When I recorded the album Hail to the Freaks in 2010, I want to say, I stupidly was doing new material on the album that wasn’t worked out yet and I was excited about it, and a few of the stories I worked on on the road for years, so a couple jokes I made about masturbation or my grandmother dying have turned into more… I try not to say “epic,” but I mean epic in the real sense that they keep going and going and I keep adding things to them.

You start the special with a bit about kids: Have you gotten better at deflecting that question?

It wasn’t my family that ever bothered me about having children. It was total strangers at parties. And I’m just not in that same situation anymore. There were a couple years there where all my friends were having kids, so I was spending a lot of time at children’s birthday parties, baby showers, or birthday parties for my friends, but it was a daytime party and everyone brought their kids. There was a one- to two-year period where I was really entrenched in that culture, and I think that’s why I was getting asked so often. And sometimes people would come up to me after shows, and that’s another thing. I had some jokes in my act about “Thank god I don’t have kids because I don’t think I’d be a great mom,” and that’s when people would come up after like I was asking to be talked out of it. But now that I’ve caught on to it and it’s part of my act for a reason, nobody comes up me after I’ve made it so very clear.

No, actually I’m lying. There’s been a couple of times here and there. My orthodontist asked me right around my 40th birthday, and we were trying to make an appointment for me to come back and I was like, “I’m traveling, I’m going to be in Europe for work.” And he said, “God, you know, this life. It has to calm down.” And I said, “It won’t; it’s what I do.” And he said, “Well what if you want to have kids?” … It does come up, but I’ve found people are asking because they’re really asking themselves.

Marriage and kids are pretty well-tread territory in comedy, but you’re sort of coming at it from an increasingly popular view: that it’s just not for you.

Well, I’d get married again; that’s how nuts I am. I’ve changed a lot since I got divorced. I used to think I got divorced because marriage wasn’t for me, but I don’t know if that’s entirely true. I definitely don’t have the specific dream of being married, but I have girlfriends that definitely know that’s in their plan. … The only reason I’m a little gun-shy about marriage and don’t idealize it is that I’ve been divorced, and it’s one of the most awful things I ever went through. It was terrifying, lonely, and really expensive. My chances of getting divorced again increase if I get married again, so there’s just no guarantee that you’ll go about divorce in a kind way with your partner. … I think it’s more popular to talk about it. I’m assuming people aren’t changing as a human race.

Your bit about dating a younger guy was also resonant, the line about not wanting to “teach him about grunge.” I’m at an age where 22-year-olds don’t know what JNCOs are!

I don’t know what that is either. Tell me.

Oh, I never knew the name of those but I know exactly what you’re talking about! … You know what I find with young people too, and why I wouldn’t be really interested in dating one, is they have that kind of blind spot where they can’t believe you’re not into what they’re into. That thing of like, “I’ve been your age; you haven’t been mine.” When I talk to 24-year-olds who are stressing about their careers in a different way than I am, I’m like, “Yeah I’ve been there.” But they don’t often want to listen.

I also like the bit about mother-daughter relationships. Women often, at a certain age, fear becoming their moms. Is that an issue for you?No, you know, I don’t fear things that I’m in complete control of. Nobody ever wants to be their parents. As a teenager, I was like, “I’m not going to be anything like my parents,” and so I wasn’t. And now I realize they have great qualities, and I’ve certainly inherited some of my mom’s flaws and some of her good things. One way that I’d like to be like my mom is that she’s really evolved as a person—not that she had evolving to do, but she’s 76 years old and she lives in the suburbs and grew up Catholic. She didn’t backpack around Europe; she had a pretty traditional, conservative life, and now she’s become a really open-minded person. She sits in the front row of my comedy shows and listens to me talk about masturbating and dating and sex and I’m divorced and she was cool about it. … Mother-daughter relationship stuff for me is a celebration. I think it’s funny that there are ways I’m just like her.

Is the podcast a way to try out material? Or is it a different channel than standup?

That was the intention, not to try out new material, but to… I don’t write standup. I think of something someone yelled out a car to me and think, “Oh, I could turn this into a bit.” I would work that out by talking about it onstage. So I thought the podcast would be great for that, and I just haven’t been able to crack that code. There’s a lot of stuff that works for the podcast but I haven’t turned it into standup yet. I don’t know if it’s even funny anymore. It’s just me talking. It’s more heartfelt.

No, it’s too short. I do longer setups and punchlines. Twitter’s where I joke about stuff I don’t joke about onstage.

I don’t know if I believe in trolls. I mean, there’s the literal definition where you can tell it’s a spambot and their name is in all caps and there’s usually a picture of an ass or a woman’s boobs or a penis ejaculating. That to me is a troll or spambot, but someone who’s really saying mean things, it’s a person saying mean things. I only get mean things said to me about feminism and being a woman. To me, I don’t see that as a troll, I see that as a sexist who’s expressing himself on the Internet. I don’t believe in trolls because I feel like when I call them trolls, I’m taking away from the seriousness. We have a cultural problem with abusing women online, and so I try to retweet what they say and expose it. I’m never trying to change minds; I’m never going to change their mind.