Toronto rapper Jazz Cartier just christened the sold-out JMBLYA festival, which is a nice way of saying that he performed first. As the Polaris-nominated newcomer with two free mixtapes and two hot singles floating around Spotify, that’s fine for now.

“I’m like a wrestler, I’m starting out,” he tells the Daily Dot backstage minutes after climbing a stack of speakers and stage-diving.

It’s a stormy Saturday in downtown Austin, Texas. Sporting neon dreads, a red sweatshirt, overalls, and plastic bags to shield his snakeskin Nike Supremes from the mud, Jazz Cartier (born Jaye Adams) performs with the unhinged grandeur of post-Iggy Pop limb-shakers—the type of usually straight, white rock singers who kick over the microphone stand or hoist it high and twirl.

“I can’t sit here and tell you that I’ve been to a rock show ever in my life,” Cartier says when I mention that this parking lot day party, buoyant with youth, recalls the mosh pit-friendly Vans Warped Tours of the late ‘90s. “All my influences come from rap, watching documentaries.”

Cartier, who is labeled as a sort of eccentric, is quick to joke about his broad colorwheel of interests. (“I want to get into nude painting soon. Crochet, shit like that. Knitting.”) But musically, he’s mostly just interested in hip-hop. Whereas freaks and geeks like Theophilus London and A$AP Rocky boast about their flourish of musical knowledge, rap has expanded in ideas enough for Cartier to find everything he needs here. “Dead or Alive” is chest-thumping, on-the-block paranoia; “Ring” is Auto-Tune, piano-layered R&B; “100 Roses” is a brass-blaring EDM drop that finds him screaming like OG Maco’s “U Guessed It.” Cartier’s latest video for “Read Alert/100 Roses” landed last week with a virtual reality component.

Like most rappers these days, Cartier is earning his stripes on the road. At South by Southwest, he says he performed eight sets. In the meantime, he’s online, scoping out the competition. (“I couldn’t imagine life without the Internet,” he says.)

“I’m the top dog. I’m the one. It’s me or nothing,” Cartier says about Toronto hip-hop. “You have Drake, then me. That’s how I see things. Period.”

Cartier chuckles immediately after the declaration. He’s also quick to douse the JMBLYA festival’s talent with praise, too: Future (“the fucking godfather”), Kehlani (“an angel”), Rae Sremmurd (“those guys are my n****as”), and white-guy-of-the-moment Post Malone (“I fuck with Post… That’s my dog.”)

He says that the next step, a proper album, is going to take him a while. A year from now? He expects to headline this thing. If that seems outlandish, keep in mind that the promoters behind JMBLYA—a two-day festival in Dallas and Austin boasting mirroring lineups that saw more than 27,000 cool kids attend—made a name for themselves by wagering on the likes of Kendrick Lamar, Chance the Rapper, Travis Scott, and Wiz Khalifa early in their careers. Saturday’s headliner, space-age Atlanta king Future, performed in Austin for the fourth time since October—an inspired 33-song set to boot. He’ll be back in the summer with Drake.

“I think it’s time for the show to start,” he said two-thirds of the way into his set. “Texas family, so we gotta do something special.”

The aforementioned Scott, having just opened for Rihanna at a nearby arena, closed the night with an unscripted exclamation point and performed blog wonder “Upper Echelon” and radio staple “Antidote.” But the rap Internet’s breakout favorites grabbed the mic in the sunlight.

Louisiana good guy Kevin Gates attacked bandwagon fans—who presumably haven’t borne witness to his stream-of-conscious Instagram videos—and didn’t even bother to perform his hit single “I Don’t Get Tired.” Kehlani, who trended nationally after a harrowing few days that involved being shamed over infidelity rumors and a reported suicide attempt, soared with her brand of DIY bedroom R&B that sparks on its personality and swagger.

Unfortunately, a cluster of trolls started a “Kyrie” chant as a reference to her ex-boyfriend and Cleveland Cavaliers guard Kyrie Irving.

She only mildly, indirectly alluded to recent viral moments between songs: “We’ve had ups and downs in love.” 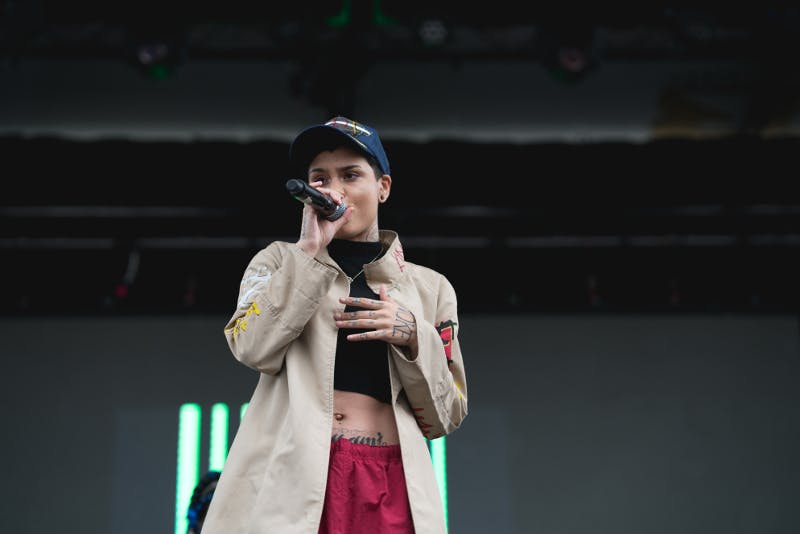 Post Malone, however, is the most obvious horse to bet on. He opened for Justin Bieber this year on tour, drew ire for accidentally saying the N-word in a video, and sang on Kanye West’s blockbuster album The Life of Pablo. On Friday, the 20-year-old Syracuse, New York-born singer likewise trended on Facebook when his debut mixtape August 26th landed on DatPiff.

“I just shaved my beard, I feel like a little kid,” Post Malone said onstage before zipping into inescapable single “White Iverson” as part of his 15-minute “special guest”-billed appearance.

Post Malone’s mixtape plays like the frank confessions of a fuckboi. “I just wanna see you, maybe talk about shit,” he sings on the Jaden Smith-assisted “Lonely.” It’s resoundingly open, an inner monologue for chill stoners who follow. There is weight and consequence to songs like “40 Funk” that find him terrified of all the Molly he just took. 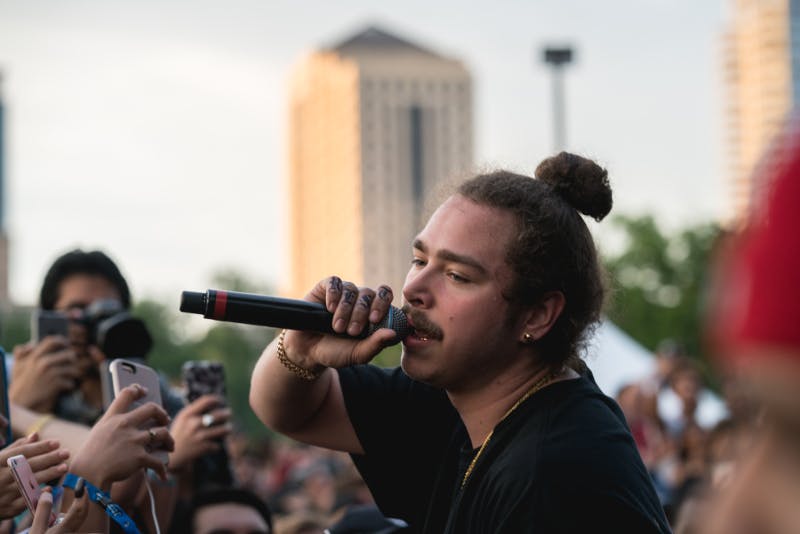 On “Hollywood Dreams Come Down,” his posturing is undercut by fear. “I can’t feel my heart,” he sings. “Don’t let me go to sleep.”

Twenty years ago, his hip-hop-tinged harmonics could have made him Uncle Kracker or the lead singer of Saliva. But it’s 2016, and rap is the only genre that matters.

Editor’s Note: This article has been updated for clarity and context.