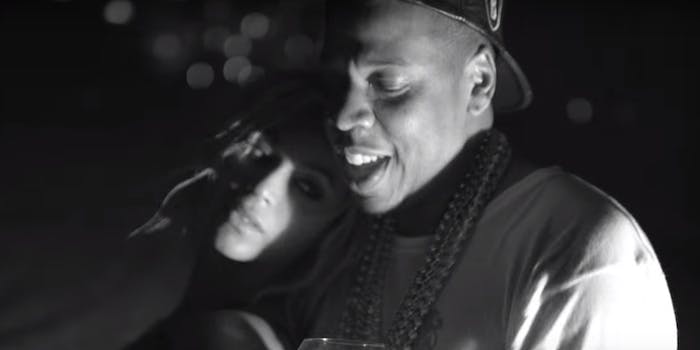 Jay Z responds to ‘Lemonade’ with a loaded Tidal exclusive

Jay-Z breaks silence on @Beyonce's 'Lemonade' on remix of Remy Ma/Fat Joe's "All the Way Up" https://t.co/iDgqd1G8ZP pic.twitter.com/5aDKq983My

Like Godzilla out of the stormy sea, Jay Z returned Tuesday night with an electric new verse on Fat Joe and Remy Ma’s “All The Way Up” remix. Unfortunately, the track’s a Tidal exclusive—well, until it’s not.

There’s a respectfully loaded mention of Prince, and protection of his master recordings—providing implicit understanding of the importance of owning your masters as a musician, as well a slick nod to Jay Z’s own infamous elevator situation:

I’m the only one in the room that they fear right now/
I think they’re clear right now/
Let’s celebrate, no red champagne, we don’t play that/
All we see is gold bottles and paper plane hats/
Twenty-one Grammys that I use for D’usse cups/
I’m on the penthouse floor, call your way up/
The OG’s say, “Hov, how high is high enough?”/
I said “till we eye and eye with the higher ups“

Though hazy on specifics, it’s safe to assume Hov’s getting locked and loaded for the summer, gearing up for significant output. Rapper Future has already said that Hov’s got a heater 16 ready on marketing genius DJ Khaled’s probable lead single to imminent record, Major Key.

Whatever Jay does this summer, let’s hope it isn’t beholden to a bum Samsung app.