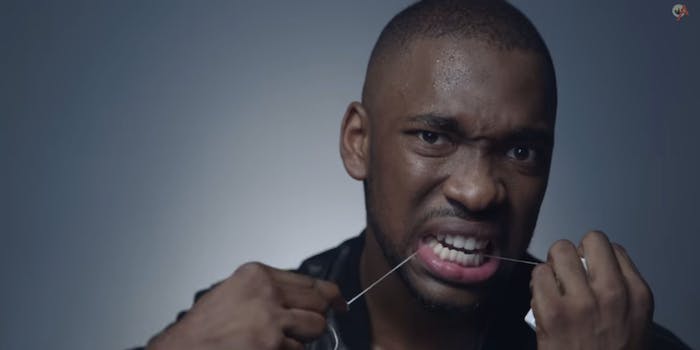 Jay Pharoah knows how talented he is.

He says he feels old at 26, but it’s because the guy is seared on both sides from being competitively creative—scrambling to blow through packs of side projects at chainsmoker pace during his off-season.

“My mom always tells me ‘You need to take a week for yourself and just chill,’ but I don’t, man,” he told the Daily Dot. “If you want to be successful, I don’t think you should take a day off.”

Pharoah worked in this phoner during his lunch hour in Lexington, Ky. He’s in the bluegrass state squeezing in summer stand-up gigs between producing standalone, timely parody videos and putting the finishing touches on his solo, no jokes, original hip-hop mixtape, which he plans to release this month.

“If you have a general idea that day—even if you don’t go to the studio—put it down. Do something, don’t just sit there and let a full day pass,” Pharoah said. “No days off, dog.”

Especially now that Pharaoh’s stock is such an appreciating asset. The Saturday Night Live centerpiece is a natural impressionist that can oscillate from a perfect President Obama to a complete-with-original-raps Jay Z. But what makes him transcendent is a thunderous knack for rolling down windows and unloading with offbeat, original characters. And, very clearly, his hustle.

“Either I’m in the studio creating something or I’m on stage doing some stand-up somewhere … or I’m creating a parody video flexing my pecs,” Pharoah said. “There’s a pec shot in there; it’s pretty dope.”

Late last month, Pharoah turned out Usher’s “Good Kisser” by way of a full-service, easy-A parody version called “Bad Kisser.” The video—released through comedy network Above Average—hit more than 112,000 views in its sleep. On the surface the joke is a literal flip that’d make Weird Al blush, but it connects because it’s rooted in relatable, daily dirt: “Your breath might not be that fresh when you wake up in the morning and you’re talking to somebody and you want to have you a little hanky panky,” he explained.

“Bad Kisser” is the latest dip in what’s been a career-making well for Pharoah. It wasn’t too long ago that the comedian was billed as “YouTube sensation Jay Pharoah.” Yet he isn’t shy about what it has done for his profile.

“I don’t know where I would be right now,” Pharoah says about life without the medium. “I’m going on tour in England, you know, just from a five-minute stand-up bit I did in 2008. You can really do some damage [on YouTube].”

Pharoah is thankful and all-embracing of YouTube, Reddit, and genre goon WorldStarHipHop, and seems to appreciate even the most insipid of YouTube-based business plans.

“You can put a video up about cats or puppies, and you’ll get like 10 million hits,” he said. “People take a hot-popping song and take the cover art and have people think that it’s that and then it makes people look at their videos. … As far as it being an avenue for nobody to make something out of nothing, I think it’s great.”

Now that he’s a post-viral network television star, Pharoah is making a bid to be a relevant voice in rap. He’s got an honest shot to jettison past the wobbly pastiche, slow-pitch punchlines, and contrived persecution complex of contemporary comic-turned-rapper Donald Glover. Whereas Glover’s Childish Gambino persona came into the game late as a suburbanite who found a hip-hop lane in genre mecca New York (University), Pharoah says he has been rapping since age 13.

“I was raised listening to like Jay and Big and Pac, Cassidy, Ludacris, even some of Drake’s stuff,” Pharoah said. “It’s my actual voice, not an impression. A lot of [the music] comes from pain. You can hear the passion through the tracks; when you hear the real stuff, you can tell what I’m talking about.”

His SoundCloud page shows promise in that there aren’t high-profile co-signs or indie rock collaborations—just half-finished originals and raps over radio beats meant to serve as technical displays. Over Drake’s “0 to 100,” for example, he’ll rap for 100 measures straight about Richard Sherman, Robert Griffin III, black face, all Marlboro cigarettes, all with subtle, throwaway similes like “I’m hating like the bad guy.”

His mixtape is tentatively called The Resurrection, because it speaks to Pharoah returning to his hip-hop roots and passions. “Struggles with growing up, relationship problems, religiously trying to keep everything balanced: I rap about that stuff,” Pharoah said.

“The best comedians and the best rappers can make you laugh and can make you cry… I believe I’ve been blessed with that gift to make you do just that.”

This summer he dropped a sorta-single called “Problems” that tips its hat to SNL forefathers Lonely Island in that it raps from a militant, self-serious, vitriolic base camp. Whereas the Lonely Island guys make the joke that their rapping characters don’t realize that they are being ridiculous, Pharoah is more honest. He’ll start a boilerplate rap boast, then immediately break character and vent self-doubt about being uncomfortable with tropes like using the word “bitch” or smoking pot like a noob.

And there may be something to feeling old at 26—that’s just long enough to have caught the tail end of the ’90s music industry hip-hop boom wherein Wu-Tang Clan solo projects were Billboard mainstays. It wasn’t any “realer” than today’s hip-hop, but it did stem from an era that hung its hat on aggressive, thick, alpha rapping. Pharoah can rev up and ride Eminem’s double-timed patterns or howl at the moon like Tupac. He’s got some head-turning lines too: “Coming straight for your necks like Southern lynching.”

It’s not all remarkable. “If You Only Knew,” with its Robin Givens lyrics and low-grade soul samples, bricks like all of the romantic 50 Cent songs since “21 Questions.” There’s even an occasional bad hashtag rap (“I’m blocking them. #HooverDam”).

But because Pharoah (rap name: J-Hulk) isn’t a fabricated character, the fame is an organic, almost integral part of his narrative when he raps, “I was 21, my peers said I’d be a coke head / I prefer Pepsi products, nigga—Mountain Dew, Code Red.”

Then later, “I’m the only person talented enough to pull an Eddie Murphy.”

Seems like even pulling a Jay Pharoah is impressive enough.

Correction: A previous version of this story incorrectly stated Pharoah’s age. He is 26.