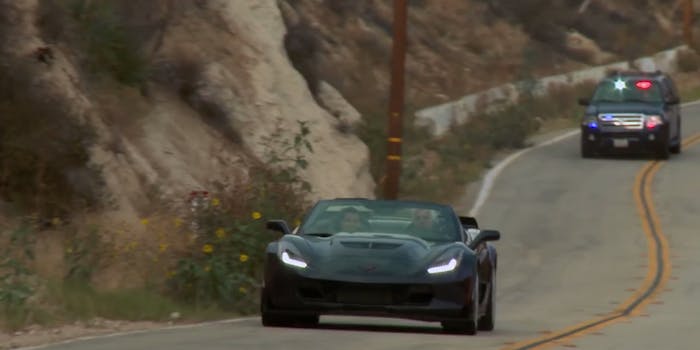 Jay Leno test drives the new Corvette, gets pulled over

In his defense, you can't not speed behind a Z06.

Even Jay Leno gets pulled over by the cops.

Leno has always been a motorhead. His collection of cars has far surpassed insane and has reached the level of stupid. His car collection is more a car museum, with everything from the Ford Model T to a McLaren P1.

Leno isn’t greedy, he loves sharing his cars with the rest of the world. His YouTube channel produces some of the highest quality car reviews, interviews, and car talk anywhere on the Internet.

Chevrolet was nice enough to bring by the new Corvette Z06. When you have a car with 650 horsepower and 650 lb-ft of torque it’s hard not to feather the pedal a bit. It’s definitely a car designed for racing. Sadly, there isn’t footage of the interaction between Leno and the police. With the recent rumblings of cops being captured on camera, we’re not surprised they cut that part out.

There is some cool technology in the Z06 as well. The car has cameras in the front and can record your driving. It can then overlay data live and help you hone in your lap times. Chevrolet also likes to boast that you can throw that video up to your social media feeds. Maybe this is the beginning of cars uploading video directly to Vine. It also sounds like a nightmare for speedfreaks—now there will always be evidence of them speeding past red lights.