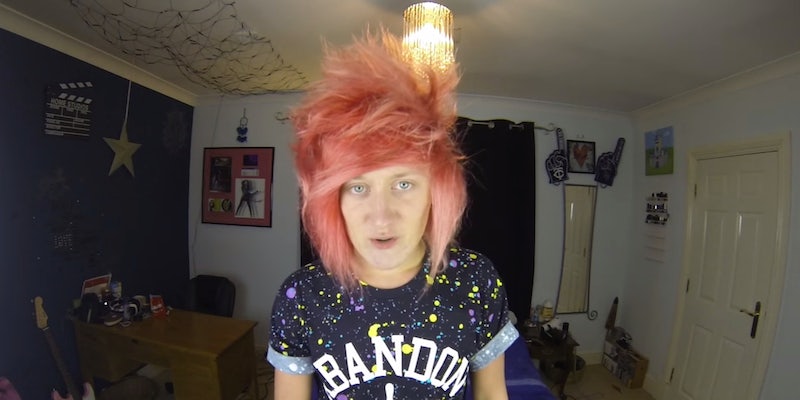 Multiple women have accused another YouTuber of sexual abuse and soliciting nude photos.

After seeing the support for the women coming out against Sam Pepper—the U.K.-based prankster who united the community after many saw the video in which he grabbed women’s butts for a “social experiment” as sexual assault—multiple women have accused another YouTuber of sexual abuse and soliciting nude photos.

Jason Viohni, better known as VeeOneEye among his fans, is a pit reporter on Warped Tour and is known for his wacky hair just as much as his videos. The 22-year-old YouTuber has a respectable following with more than 429,000 subscribers watching weekly. And now, he joins Pepper and more than a dozen creators on YouTube who are being accused of abusing and taking advantage of fans.

Ania Magliano-Wright finally got the courage to tell her story after she saw the support that Dottie Martin and the other women who alleged Pepper harassed or violated them received. When she was 15 and Viohni was 20, they met in London, where he got her drunk and slept with her—and then a message revealed that he wanted to get her drunk again.

After posting the video, Magliano-Wright told her Twitter followers that if any of them had similar stories about Viohni, they could share them with her (even anonymously), and she hoped that telling her story would prevent similar things happening to other people.

I’ve already had people telling me they’ve experienced the same. Please don’t feel worried if you want to come forward, we will support you

With her story out there, more people started coming forward, and the support started pouring in, with many of them telling their followers that Viohni committed a crime. The people coming forward wrote that Viohni made them feel uncomfortable, got another girl drunk and had sex with her, and asked girls for nude photos. One of his friends felt betrayed after finding out that Viohni had lied to him about the rumors and allegations.

I need to talk about this considering everything is coming out about him now. pic.twitter.com/ABKQCSY08b

.@veeoneeye I sincerely hope you formally address the issues raised. Because this certainly isn’t a social experiment. This is fucking sick.

If you support Sam Pepper or VeeOneEye, unfollow me because you’re an idiot and you sicken me.

.@veeoneeye got a 15 year old fan drunk and slept with her; his fans respond “everyone makes mistakes.” That’s not a mistake. That’s a crime

As with Pepper last week and many before him, some of Viohni’s fans tried to stand up for him and proclaim that “everyone makes mistakes,” but it appeared to be a vocal minority.

Pepper has essentially disappeared from social media after being dropped by Collective Digital Studio last week, but Viohni addressed his allegations full-on. He made an unlisted video and tweeted it towards Magliano-Wright.

In it, he admitted that her allegations were true. He blamed his actions on his Mormon upbringing and his dependency on alcohol when he was younger, and he said that he’s learned from his mistakes. Many in the YouTube community didn’t accept his apology and thought he was putting the blame on things other than himself.

TW: youtuber jason/veeoneeye has posted his response to Ania’s story. here is my reply to his video. stay safe x pic.twitter.com/XSL4dLmVRa

Why do Sam Pepper & veeoneeye make it worse for themselves by making excuses instead of simply apologising & accepting that they did wrong?

A YouTuber openly admits to getting an underage girl drunk and sleeping with her and it’s welcomed with “everyone makes mistakes”. What?

While Magliano-Wright hasn’t responded to Viohni directly, she has seen the video and denied that he tried reaching out to her while pointing out that he only really meant for her to see the video. In a post where she thanked her supporters, she included several screenshots to show how little Viohni “changed,” and pointed out that he brought condoms when he met up with her.

“Please realise that what Jason did was not a ‘one-off’ thing,” she wrote. “And it was not during a ‘bad phase’. These events did not all happen around the same time; there have been reports of recent cases and some from years ago (some of these overlap with the period in which he apparently ‘changed’).”

This is far from the first time that women have come forward with allegations against YouTubers. Back in March, Tom Milsom, Alex Day, and close to a dozen other creators were accused of sexually abusing their fans. Ed Blann, who’s also faced allegations, received backlash for returning to YouTube. Mike Lombardo was arrested for child pornography and is currently serving a five-year sentence.

The Daily Dot has reached out to Viohni’s management and we’ll update if we hear anything back.