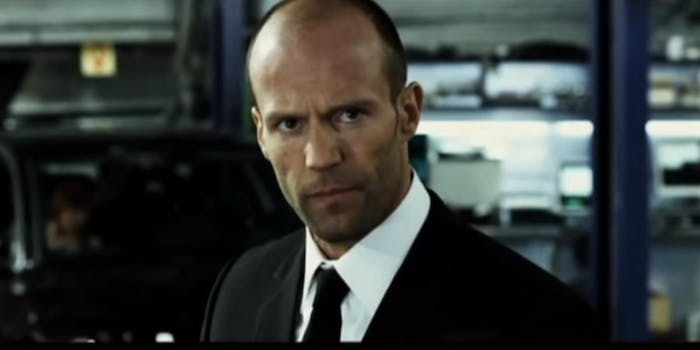 Here’s a supercut of every Jason Statham punch ever

You don't want to be on Statham's bad side.

You might call this a supercut of Jason Statham punching people, but you could just as easily call it a regular day in Statham’s life. He’s just that intense.

The four-and-a-half-minute supercut from the folks at Burger Fiction features every punch Statham has ever thrown on screen, dating back to his early work in Danny Boyle’s Lock Stock and Two Smoking Barrels. The Stath is shown punching dudes in the face, in the crotch, while wearing Hulk hands, while on fire, and often while well-dressed—there were not as many shirtless Statham fights as we thought we remembered.

The video tallies 264 punches altogether, which seems a little low, if you ask us. And if you’re wondering, Stath punches Dwayne “The Rock” Johnson—the only person who could conceivably take him—from punch 251 through 261.

This video proves that anyone in their right mind would want Statham on their side. If he’s one of the bad guys, then you join him!