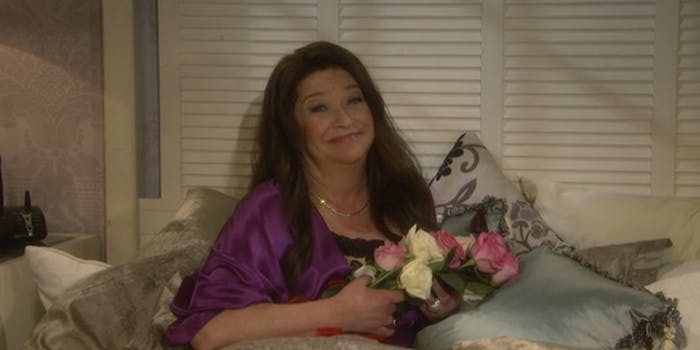 “Life is a lot like live TV. You just go with it.”

Saturday Night Live alum Jan Hooks passed away on Oct. 9 at the age of 57. The cause of death is still unknown, but on Facebook and Twitter, our digital mourning ground, the remembrances have come pouring in.

My girlfriend in the 80’s and my friend forever, Janners. God, were you talented. Too soon and too sad. #JanHooks pic.twitter.com/l2wGR9HJ0x

From 1986 to 1991, Hooks was a cast member on SNL, and she created some of the most memorable characters of the era. In this recent “The Women of SNL” retrospective, former cast members like Ana Gasteyer, Tina Fey, and Maya Rudolph mock The Real Housewives franchise as part of a faux “reunion.” Hooks appears via satellite, in bed, and makes a joke about how she fell down the stairs and got two black eyes from her boobs hitting her in the face.

She then delivers the gut-punch: “Life is a lot like live TV. You just go with it.”

Hooks knew how to toe the line between comedy and sincerity perfectly. Hopefully there will be an SNL tribute this weekend. Here are five of her best sketches.

Hooks was great at channeling singers, and her Tammy Wynette impression is no exception.

Here she plays Kathie Lee Gifford, singing to a monkey.

Hooks and Phil Hartman were SNL’s power duo; their chemistry was untouchable and any scene they were in together was gold. Here they are in the classic Sinatra Group sketch, in which Hartman plays a cantankerous Sinatra and Hooks plays Sinéad O’Connor.

The Hooks/Hartman short “Love is a Dream” is a classic, and an example of how SNL could sometimes hit you right in the heart.

You can watch all her sketches here.