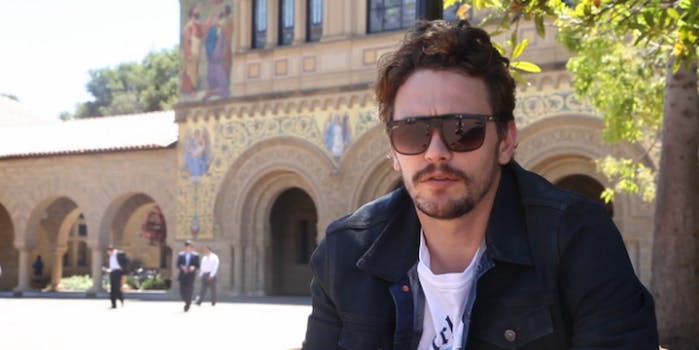 James Franco will leave you a voicemail for $450

That's just one of many perks accompanying the actor's Indiegogo campaign to raise $500,000 to shoot a film trilogy.

James Franco has starred in the three of the biggest blockbusters of the year: Spring Breakers, Oz the Great and Powerful, and the recently released This is the End.

But for his latest vanity project, the current Rolling Stone cover star is taking the path blazed by Zach Braff and Veronica Mars, turning to the crowd for the funding of three new movies, based on his short stories about his hometown, Palo Alto, Calif.

The star’s IndieGoGo campaign aims to raise $500,000 to help make the films. He’s tapped a few upcoming directors, all graduates or grad students at his alma mater, New York University, to take charge of the films, and hopes they’ll start shooting in August.

“Over the past 3 years I have directed and produced 6 feature films. I’ve also begun dedicating much of my time to teaching,” he wrote. “Giving new filmmakers the opportunity to direct and produce films has become one of my greatest passions.”

Franco’s pledged to fund part of the project, but he needed help to raise funding to cover the complete costs. The funds will be split between the three films equally. So far he’s raised a little over $28,000.

In an apparent attempt to avoid the backlash Braff has faced, Franco pledged to donate all profits to Art of Elysium. According to the 25-year-old, the nonprofit, which he says he’s been working with for years, “encourages working actors, artists and musicians to voluntarily dedicate their time and talent to children who are battling serious medical conditions.”

“Working with Art of Elysium has given me the opportunity to share my creativity with hospitalized children and give them the gift of creativity,” Franco added. “These children have inspired me and pushed me as an artist in ways that are truly indescribable.”

Many of the perks backers will receive are far better than average for crowdfunded movie projects: VIP screenings, personal voice messages, producer credits, and appearances in the movies. Also in the mix is an original Franco painting for a $7,000 donation.

While other celebrity-driven crowdfunding campaigns have caught flack in the media,

Kickstarter claimed in regards to Braff that his campaign brought additional funding to other projects which might not have received that backing otherwise.

In Franco’s case, it seems he opted for Indiegogo so that his project could receive funding even if it does not reach the goal.