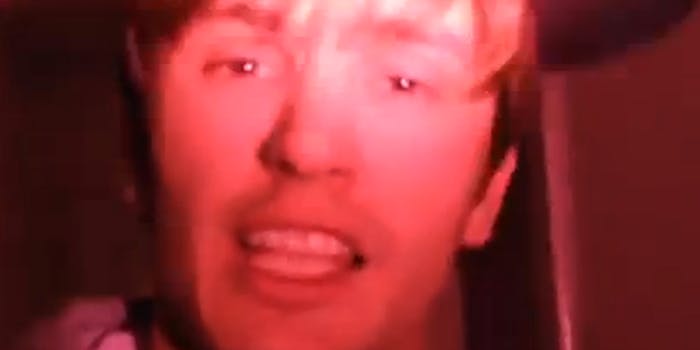 James Franco will never become any of our boyfriends, so hearing him coo the word will have to do.

It’s scientifically proven that James Franco will never become any of our boyfriends, so hearing him coo the word will have to do.

The world’s most sexually casual frat boy recorded a rousing edition of himself lip-syncing to Justin Bieber’s hit “Boyfriend” with a Selena look-alike. It made a brief appearance on Franco’s WhoSay account before quickly disappearing. Copies of the three-minute opus have surfaced on YouTube, however.

Trapped in what appears to be two-star room in a Hilton hotel, Franco masterfully moves his lips and hips while caressing some girl named Ashley Benson. (She’s on Pretty Little Liars, which incidentally returns tonight!). Or the video is some weird guerilla campaign for a really good movie called Spring Breakers, starring Benson, Franco, and Selena Gomez.

Wearing a plain hat, grey jacket, and some ugly Bieber-ish bangs, he looks like a struggling rentboy turning to YouTube’s affiliate program for some extra cash.

Anyway, check out the, uh, film’s slick editing to watch Benson humping the bed, Franco’s flawless execution of the “na na na” chorus, and a come-hither stare that is enough to again distract you from his bangs. Franco for all the Webbys!