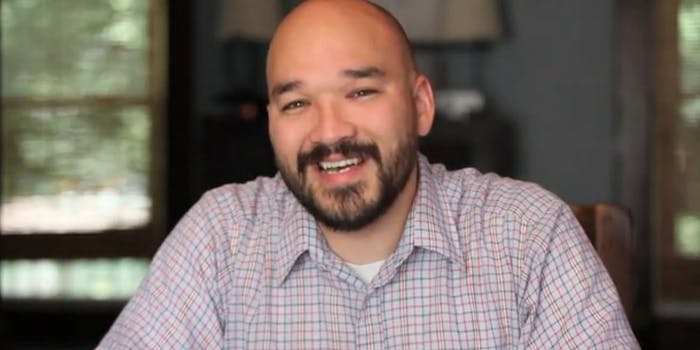 James Erwin sold a movie based on a Reddit thread to Hollywood. Now he's back with a novel.

An author who once landed a movie deal from a Reddit post is now working on a new project.

James Erwin, known as “Prufrock451” on Reddit, first rose to fame in September 2011. In an AskReddit thread, Erwin used redditor The_Quiet_Earth’s prompt, “Could I destroy the entire Roman Empire during the reign of Augustus if I traveled back in time with a modern U.S. Marine infantry battalion or MEU?” as a springboard. He produced a detailed, compelling response that spanned several comments. As the upvotes flowed his way and demand for continuation of the story grew, he created the subreddit r/RomeSweetRome to appease his new fanbase. Roughly a month later, he was approached by Warner Bros. to turn Rome Sweet Rome into a motion picture screenplay.

Now Erwin has set his sights on a new goal: publishing a science-fiction novel. Entitled Acadia and set in the future, the story follows the trials that humans and artificial intelligence creations alike must face in the dawn of space colonization. Unlike Rome Sweet Rome, the story wasn’t born from a Reddit thread.

“Acadia began as a screenplay pitch, and I reworked it when an editor asked if I had any novels,” Erwin revealed.

To secure funding, Erwin launched a Kickstarter page. He has a goal of $9,999 to meet by October 9. The perks are plentiful, with $20 getting you both a digital and print copy of the book. A $500 pledge will not only get you top-shelf benefits like a signed hardcover edition of the book and passes to its New York City launch party, but also the opportunity to name one of the book’s characters. So far, 250 backers have managed to raise in excess of $7,500.

“I’m doing this as a Kickstarter project so it will be about my ideas,” he explained. “I have worked with traditional publishers and a manager, and I would love the opportunity for people to hear my voice.”

As his streak of success continues, Erwin has never forgotten the Reddit community that first rocketed him to Internet notoriety. In fact, if all goes as planned, he would like to see a heavier involvement from them in his projects.

“We have plans to include the community, and bring in lots of illustrators and artists in other media,” he said.

Regardless of what the community’s role turns out to be, one thing that is never changing is Erwin’s love and appreciation for his fellow redditors.

“I am very grateful for everyone who has encouraged me during all of this,” he said. “I’m extremely lucky. I’ll do my best to live up to this by creating something great.”

As for Rome Sweet Rome, it continues to make its way through Hollywood, but without Erwin’s involvement.

Needless to say, a story plucked from the comments of Reddit isn’t nearly polished enough for major film studios. Erwin discussed the erosion of his own creative control over the Rome Sweet Rome project as it moved forward to become an actual screenplay.

“It’s difficult to let go of something you created and believe strongly in, but that’s the only way to make something the size of a movie,” he said. “That balance between consensus and solitary vision – I can’t believe anything ever gets made.”