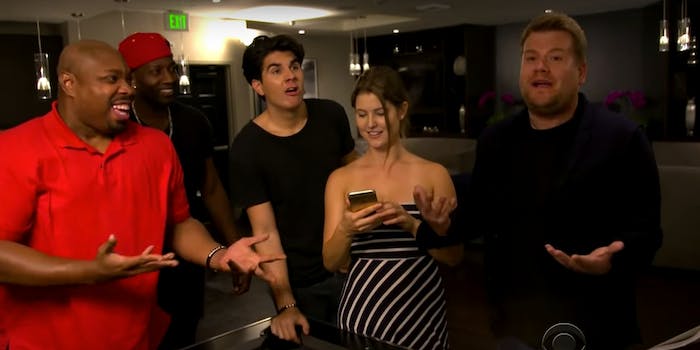 Never ask Corden if he fancies a cup of tea.

James Corden is expanding his online horizons, six seconds at a time.

Corden was already planning to film an episode of The Late Late Show at YouTube Space L.A. later this month, but until recently, he remained blissfully ignorant of Vine. But because his show’s YouTube presence makes him an online creator of sorts, Corden decided to visit the apartment complex where many of Vine’s top stars live to see what all the fuss was about.

With Vine stars like King Bach, Amanda Cerny, and Christian DelGrosso leading him every step of the way, Corden soon saw the benefits of the six-second format—and using that format to do absolutely everything imaginable.

Once Corden got the hang of it, the stars helped him kick off his own Vine career. He probably won’t give up The Late Late Show for it, but he’s got some powerful friends in high places.