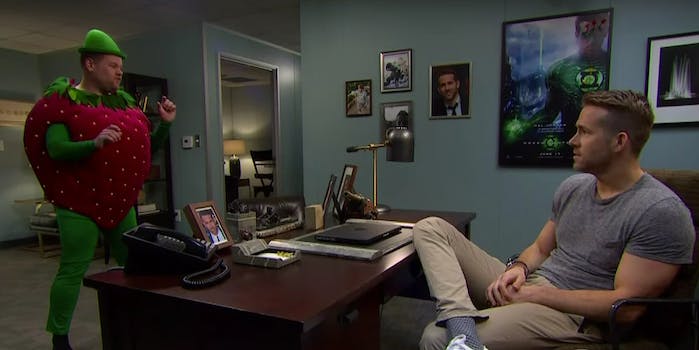 Sorry James, but Deadpool is more of a solo act.

Even though Deadpool was only released last week, James Corden figured that it was never too early to make some unsolicited suggestions about the greenlit sequel.

The Late Late Show host loved the movie just like everyone else, but he felt it was missing a little something. Most superheroes had sidekicks, he said, so why shouldn’t Deadpool? And who better than Corden to fill the role?

Instead of reaching deep into the Marvel archives, Corden presented his own range of characters to a deeply resistant Ryan Reynolds, each cuter and more absurd than the last—and none quite perfect enough to keep up with the Merc with a Mouth. Eventually, Reynolds countered with an even better idea—and he answered the age-old question of how Deadpool goes to the bathroom in that suit.

We’d pay to see that movie.