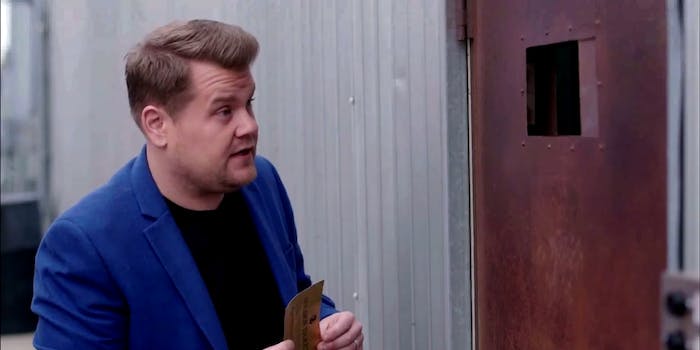 It actually makes a lot of sense.

James Corden had some big shoes to fill on his first episode of CBS’ The Late Late Show.

Out of all of the potential candidates to take over for Craig Ferguson, the 36-year-old British actor, virtually unknown to most American audiences, seemed to be among the least likely—at least until you learn how he got the job in the first place.

Corden’s tale involves a Willy Wonka-esque contest for the funniest people in Hollywood, a talk-show-deprived Jay Leno as both the mentor and the villain, and training montages for how to be strong, funny, and an expert in pretending to care—all of them packed with cameos. It’s almost crazy enough for us to actually believe it.

Once Corden settled into his actual show—using a format that will apparently seat all of his guests on-stage with him at once—the host teamed up with Tom Hanks to reenact his entire film career. They hit the famous flicks as well as the more obscure ones, and Corden pointed out something very important: he didn’t get Cloud Atlas either.