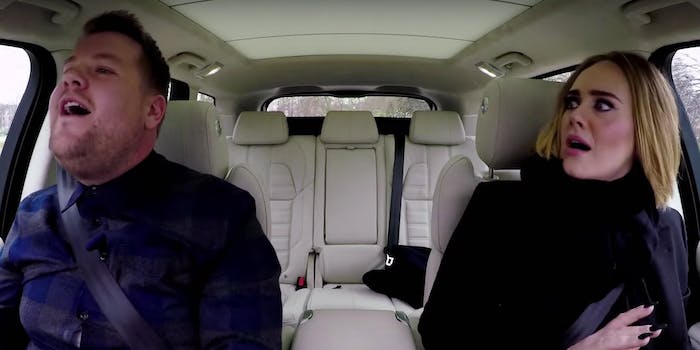 The car belt-a-thon may be coming to your TV.

James Corden’s most successful late-night segment is about to get a lot bigger.

The host of The Late Late Show is currently shopping around a series based on Carpool Karaoke, the recurring segment in which he and a famous musician or band drive around Los Angeles (most of the time) while belting out some of their biggest hits.

Corden won’t host this version of Carpool Karaoke—he’ll let the network that picks up the show name the host —but he does plan to stay on as an executive producer and may occasionally appear on the show.

It’s not the first late-night segment to make the jump from TV and YouTube back to TV and YouTube. Spike TV’s Lip Sync Battle, based on the popular Tonight Show segment, is a massive hit, with LL Cool J and Chrissy Teigen holding the reins, and just last month, Spike TV announced a loose spinoff of Carpool Karaoke called Caraoke Showdown, with Craig Robinson set to host.

Nothing is set in stone yet, but it’s hard not to get excited. After all, since Corden debuted the segment last year, he’s managed to produce some entertaining and harmonic collaborations while simultaneously letting his guests show off their human side. Here are our favorites.

Carpool Karaoke was already a known entity by the time Adele stepped into Corden’s car while he was in London for the holidays, but her ride turned it into something else entirely. She endeared us by rapping Nicki Minaj’s verse in “Monster” and singing the Spice Girls, but nothing could’ve prepared her for Corden’s incredible harmonies. There’s a reason it’s the most viral late-night video in years.

As far as spousal gifts go, it’s hard to top getting Stevie Wonder to serenade your wife, as Corden did after his wife Julia Carey didn’t believe that he’d be spending the day with the famous singer.

Everyone’s eyes are on Justin Bieber, but no matter what you think about him and his music, it’s hard not to feel bad for him when you hear him explain his mindset after paparazzi photos of his penis ended up online.

We can only imagine what it took to convince Mariah Carey to join Corden for Carpool Karaoke—let alone play along with his schtick—during Corden’s first week on the air. But the result was proof that the gag could work, and it showed other musicians that they were in safe hands inside that car.

Why get one musician to help Corden to get to work when you can get four? Bringing One Direction along for the ride brought in fans who might not normally watch The Late Late Show, and it expanded everyone else’s horizons by teaching them about the band beyond the myths, memes, and conspiracies.