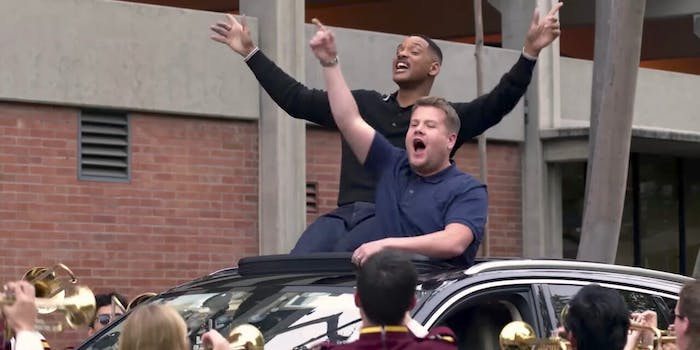 James Corden's new show got a six-minute trailer with Will Smith.

As Carpool Karaoke: The Series, the TV show based on James Corden’s viral Late Late Show segment, finally debuted on Apple Music, Corden gave fans and viewers a six-minute preview of his karaoke ride with Will Smith.

Corden’s segments often feature both legendary and contemporary musicians who tend to have a new album to promote, but Smith doesn’t—and many of the show’s upcoming guests aren’t even professional musicians. While the lack of audience reaction is noticeable in the preview, the lack of restriction from the late-night format and timing allows Corden and Smith to get a little wacky, as a marching band emerges to play “Gettin’ Jiggy Wit It” and, as the rest of the episode’s preview shows, crash a wedding.

Smith also opens up about having his first hit on the radio when he was still in high school. Meanwhile, Corden prompts Smith with a number of absurd ideas that would make him say “Aw Hell Naw.” The one thing he’d be fine with is, as you can imagine, pretty controversial.

The full episode is available on Apple Music, with new episodes debuting on the streaming service every Tuesday.