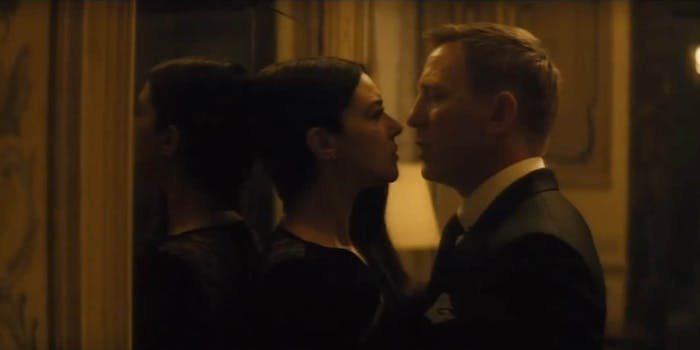 It wouldn't be a Bond film without a mysterious villain and a car jumping over another car.

The James Bond franchise has a hard act to follow after Skyfall, but the new movie is already shaping up to look very, very cool.

The first trailer for Spectre was enigmatic, hinting at Bond’s mysterious backstory and introducing Christoph Waltz as the new villain, Oberhauser (rumored to be a pseudonym for Ernst Stavro Blofeld). It had a surprisingly somber tone for a Bond film, but this new TV spot—airing during the NBA Finals—gives us a better look at some of the stunts and explosions we’ve come to expect from 007.

Also, Bond gets up close and personal with characters played by Monica Bellucci and Lea Seydoux, the film’s two new Bond Women.

Guardians of the Galaxy fans may also recognize former wrestler Dave Bautista playing a villain named Mr. Hinx, seen here breaking someone’s neck. Well, he was hardly going to resolve things diplomatically, was he? This is Bond, after all.