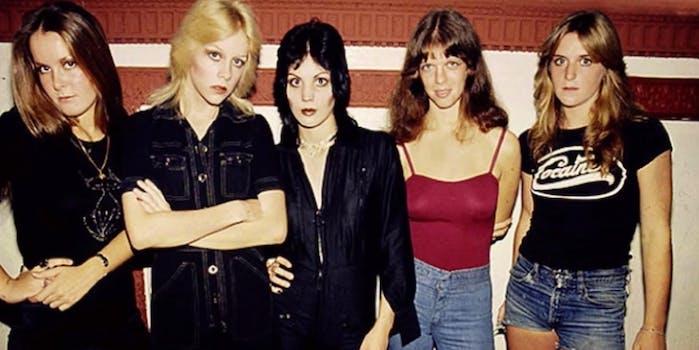 'All of us have been passive bystanders at some point in our lives.'

Last week, the Huffington Post published “The Lost Girls,” which detailed the 1975 rape of Runaways bassist Jackie Fox (real name Jackie Fuchs) by the band’s manager, Kim Fowley. Writer Jason Cherkis revisits a hotel room on New Year’s Eve 1975, where band members and crew were partying after a show. We’re told Fuchs was given several Quaaludes by an alleged roadie, and that she wasn’t someone who drank or did drugs.

We’re told that Fowley raped the unconscious Fuchs, then 16, in front of a room of people.

In the days since the story was published, it’s circulated widely on social media, with commenters coming out to discredit Fuchs, lend support, and share their own stories. Former members of the Runaways—guitarist Joan Jett and singer Cherie Currie, who were said to have been in the room that night—have published statements addressing the claims and their role in the night’s events.

Sunday night Fuchs posted her first response since the story came out. She said, in part:

I know some people watching the online drama unfold have been discouraged by the lack of support I’ve received from my former bandmates. To which I can only say that I hope you never have to walk in their shoes. My rape was traumatic for everyone, not just me, and everyone deals with trauma in their own way and time. It took exceptional courage for many of the witnesses to talk frankly about how they felt. Most have apologized to me for their inaction that night—apologies that have been unnecessary, though welcome.

The Runaways, which formed in 1975, were Fowley’s Sunset Strip creation, an all-girl teen band that landed in the mid-’70s glam rock scene. Kristen Stewart and Dakota Fanning played Jett and Curie, respectively, in the 2010 Floria Sigismondi biopic. In the film, Fowley (played by Michael Shannon) is portrayed as a power-hungry, emotionally and physically abusive Svengali figure, but his more predatory behavior was conveniently out of sight.

Fowley’s abuse of power was an open secret, and when he died in January, the accolades came pouring in, but so did reminders that he was a sexual predator. In the HuffPo piece, songwriter Kari Krome, who was also in the hotel room that night, recounts how Fowley sexually assaulted her when she was just 14.

On Friday, Jett posted a response to Facebook, after many fans called for her to speak up:

Anyone who truly knows me understands that if I was aware of a friend or bandmate being violated, I would not stand by while it happened. For a group of young teenagers thrust into 70s rock stardom there were relationships that were bizarre, but I was not aware of this incident. Obviously Jackie’s story is extremely upsetting and although we haven’t spoken in decades, I wish her peace and healing.

The response was disappointing to many fans who thought Jett, a supporter of young women’s music and education, would support Fuchs. On Friday, Currie responded with her own short post, followed up on Saturday by a longer response:

I have been accused of a crime. Of looking into the dead yet pleading eyes of a girl, unable to move while she was brutally raped and doing nothing. I have never been one to deny my mistakes in life and I wouldn’t start now. If I were guilty, I would admit it. There are so many excuses I could make being only one month into my sixteenth year at the time that people would understand but I am innocent.

In a 2000 blog post from the now-defunct JackieFox.com, Fuchs wrote about a chapter in Currie’s then-unpublished autobiography in which “Cherie claims that when we played the Golden West Ballroom in Norwalk, California, Kim Fowley drugged a teenaged girl and our other manager forced us to watch Kim rape her. Cherie claims that the rest of the band sat around and watched this, and that I, after seeing it, asked the rest of the band if they had any more hamburgers because I was still hungry.”

In Currie’s fictionalized account, Fuchs was now the bystander. The HuffPo article states that Fuchs threatened legal action and the publisher eventually dropped the book. At that time, though, Cherkis relates that she “continued to stay silent about what had happened to her. She wasn’t ready to come out as the true victim.”

In an interview with Pitchfork’s Jessica Hopper, Cherkis explained that Fuchs wanted to explore the science of the “bystander effect.” Cherkis interviewed nearly all living witnesses in the room that night, and their accounts are gut-wrenching, their remorse palpable. Those seeking to discount her story have asked why Fuchs is just now speaking out. He told Hopper:

Jackie told me she didn’t say anything for three reasons: one, that if she did, no one would back her up, and she was full of shame about what happened. And really confused, because in a way she worried about her own, like, “why aren’t people comforting me? I must have done something wrong.” And so she was full of shame and anguish over it.

A lot of people are commenting on how awful it was that Joan and Cherie did nothing while Jackie was raped by Kim Fowley, and there’s been a lot of talk about the bystander effect. I understand why it’s possible someone did nothing at the time—it’s not hard to see why young fucked up partying people would not act. Maybe they were glad it wasn’t them. He was their ticket to being rock stars, touring, recording—living their dream. Maybe they thought this was part of rock and roll, that she got this messed up, too bad for her. She was an outsider in the band, and I’ve seen from personal experience how a faction will grab their unity by looking down on someone else. But people grow up, and they learn, and they have the chance to acknowledge, atone for, make amends for their past. The fact is that decades have gone by, books have been written, movies made. There were so many opportunities to let Jackie know that they regretted that night. The only shame left in this story is theirs to bear.

I only wish that if my bandmates can’t remember what happened that night—or if they just remember it differently—they would stick simply to saying that. By asserting that if they’d witnessed my rape, they’d have done something about it, they perpetuate the very myth I was trying to dispel when I decided to tell my story. Being a passive bystander is not a “crime.” All of us have been passive bystanders at some point in our lives.

If we have any hope at all of putting an end to incidents like these, we need to stop doubting the accusers and start holding rapists, abusers and bullies accountable. What we don’t need to do is point fingers at those who weren’t to blame for their actions.