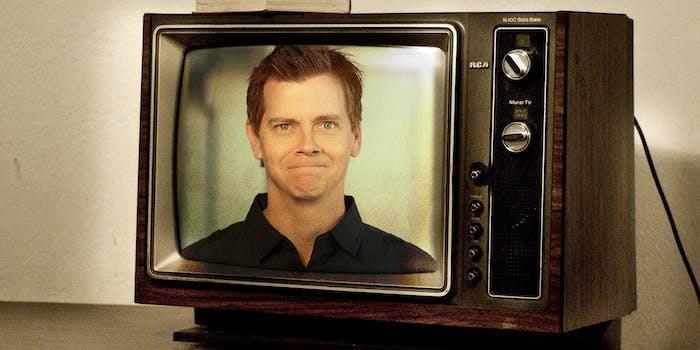 Get a look behind the scenes of the YouTube prank world.

The family that pranks together stays together—or at least that’s the logic behind Jack Vale: Offline, a new HLN series that follows the exploits of a family of YouTube pranksters and what it takes to pull off their epic videos.

“For a few years, we’ve had networks and production companies interested in what we’re doing with the family, but it wasn’t something we’d pursued,” explained Vale, who’s been making prank videos on YouTube since 2007. He’s amassed 1.2 million subscribers and won the 2014 Streamy for best pranks.

After Vale and his family met with HLN (disclosure: HLN is a video partner of the Daily Dot) at VidCon, the seeds for the new show took root. Vale describes it as a behind-the-scenes look at what it takes to make his videos, following his family as they move to Las Vegas for a new, fertile ground for pranking. Along for the reality TV ride is the entire Vale family, from wife Sherry to their youngest daughter, 4-year-old Jazmyn. But if you’re looking for Osbourne-style reality mayhem, the Vales are definitely a departure.

“When the Osbournes were on, we watched them,” Vale told the Daily Dot. “All of that stuff is super entertaining to us and our family; even the Kardashians are interesting to us. This is just so different because a lot of reality shows have that element of drama or conflict going on. That’s not really in this show. There’s some things that happen that cause a little bit of stress in terms of getting the right shots, but this is really a family-friendly show. There’s a lot of laughter in our house all the time, and the show really captures that.”

.@JackVale makes a living by pranking people & putting it on the Internet… And he’s coming to @HLNTV! #ValeOffline http://t.co/064bVxdNB9

Vale says his kids learned early on to roll with the punches of their prank-filled life; they’re the kind of family who would wake up one morning and decide to head off somewhere for a few days’ vacation on a moment’s notice, so the show’s premise suits them perfectly. Each episode of the show will coincide with an actual prank perpetrated by the family and released on their YouTube channel. While the world of TV didn’t change what kinds of pranks he does, Vale said it did shift how he went about his days.

“It definitely didn’t change the style, but it changed the structure,” Vale said. “The interesting thing to me is we’re shooting this for TV, so we 100 percent have to get this done. So if I’m shooting for YouTube, I might have a crappy day where we don’t get the reactions we want, so we have to go back and do it another day. The fun thing about this is we have this whole crew, a team of people around you, to just really make stuff happen really quickly.” Thanks to the help of a TV crew, they had the ability to easily switch locations, figure out alternatives, and get the shots they needed for their prank videos.

While Vale is not the first YouTuber to make the jump from computer screen to TV screen, he thinks the allure of networks is much less now than it was in the early days of YouTube.

“[YouTubers are] making a lot of money doing what they’re doing, and they’re in control of everything,” Vale said. “For me, I’m an old-school guy. This has always been my goal. I love that thought of branching out and putting my eggs in different baskets, but I’ve been open to everything, whatever God wants for the family.”

Vale pointed out, however, that not all YouTubers are made for TV—or vice versa.

“Anybody with a camera can be on YouTube,” he said. “Networks and production companies have a lot to weed through.”

In the field of pranking, many have come under fire for either questionable tactics that cross the line to physical and sexual harassment or methods that end up with less-than-honest video premises. For Vale, who’s kept his work family-friendly, he says the laugh is always the focus, not the prank.

“I know that the type of pranks that I do really are harmless and fun,” he said. “For me it’s not about the pranks; it’s about the comedy. I love making people laugh, and pranking is an avenue to make people laugh, I’m all for it. If someone does get upset, if that does happen, I’m a pretty good talker. I can smooth things over.”