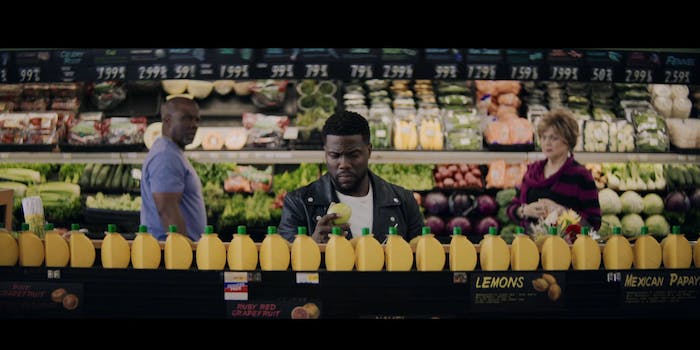 Kevin Hart has been feeling pretty judged lately. Since the comedy star got caught up in a cheating scandal last year, Hart decided to team up with J. Cole for a music video on his new album called “Kevin’s Heart.” The video displays themes of judgment and regret, along with big words written in the clouds, “Choose Wisely.”

J. Cole on Friday dropped his latest album, KOD, which is expected to top the Billboard charts this week. Vulture points out J. Cole and Hart are “longtime buddies,” so it’s only natural they would team up to make Hart’s personal struggles a part of the artistic expression that is KOD.

“I’m at a place in my life where I feel like I have a target on my back and because of that I should make smart decisions, and recently, I didn’t,” Hart said last September in a public apology concerning the scandal.

Hart took to Instagram to apologize to his pregnant wife for cheating, saying he would “do better.” The scandal also resulted in an extortion attempt over an alleged sex tape, HipHopDX reported.

Extras in the new music video are featured judging Hart with nasty looks in the grocery store and at restaurants while multiple attractive women simultaneously attempt to catch his attention.

People on Twitter are surprised that Hart allowed J. Cole and co-director of the video Scott Lazer to “immortalize his infidelity,” but the video certainly fits in with the rest of the album’s theme of self-reflection.