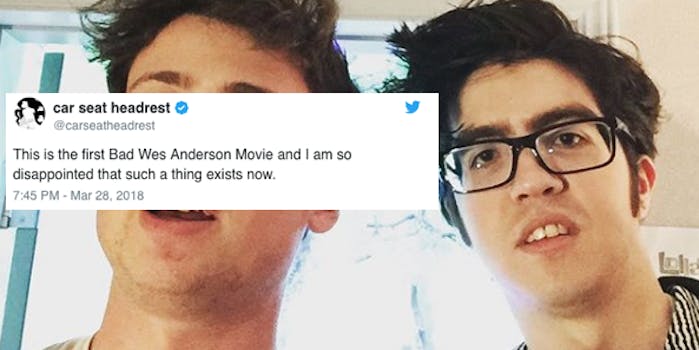 Is ‘Isle of Dogs’ racist? The dude from Car Seat Headrest thinks so

'It is an infuriatingly bad film.'

The film—about a fictional island of abandoned dogs off the coast of Japan—has stirred up some controversy for the twee director, who has been criticized for his insensitive depiction of Japanese culture. The movie is doing great as far as America’s mainstream critics are concerned (it has a 93 percent on Rotten Tomatoes), but Anderson’s simplistic handling of race and imagery has been a consistent critique of the movie since its recent premiere at the Berlin International Film Festival.

For starters, people struggle to understand Isle of Dogs‘ extremely white cast. Bill Murray, Jeff Goldblum, Scarlett Johannson, Tilda Swinton, Yoko Ono, Bryan Cranston, Edward Norton, Greta Gerwig, and Frances McDormand all lend their vocal talents to the all-star lineup, and while some Japanese actors do appear in the film, the main roles are definitely dominated by white Americans. Anderson’s casting strategy has been described as “whitewashing,” while gentler critics have puzzled over the movie’s uncharacteristic “blind spots.” Beyond that, depictions of Kabuki theater, sumo wrestling, and haiku poetry have some viewers worried that Anderson has oversimplified Japanese culture and reduced the movie’s setting to a caricature.

Car Seat Headrest singer Will Toledo, a self-professed Anderson fan, apparently falls into that critical camp. He took to Twitter Wednesday night after seeing the movie, and called it “racist” and “infuriatingly bad.”

like. why. why is it racist. why is it written as a joyless kid's film when it's specifically designed to be alienating and inappropriate for kids. why is it so fucking ugly

This is the first Bad Wes Anderson Movie and I am so disappointed that such a thing exists now.

“This is the first Bad Wes Anderson Movie,” Toledo lamented. “And I am so disappointed that such a thing exists now.”

The singer is known to speak his mind online. Just recently, he called for the shuttering of his fandom’s subreddit after infighting in the community left him wishing everyone could just “chill the f*ck out.”