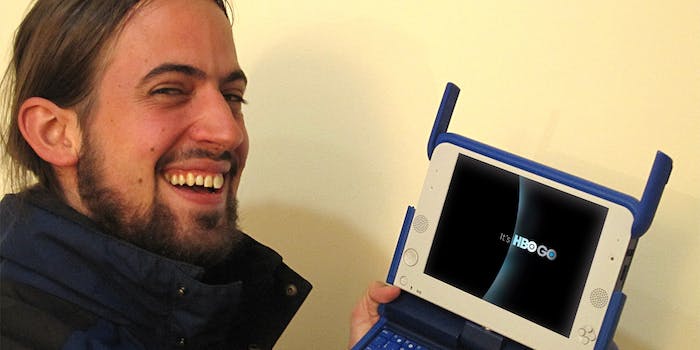 Many Internet users don’t pay for premium TV—but they’d gladly shell out a few extra bucks a month for Game of Thrones.

Backed into a corner in an effort to stave off Netflix’s unwavering collection of market share in the world of television watching, Time Warner CEO Jeff Bewkes revealed that the company’s considering ways in which it can properly roll out the ever-popular HBO Go to Internet users who don’t currently pay for premium TV.

Speaking Wednesday at a Goldman Sachs investor conference, Bewkes explained that what his company’s long considered “the best opportunity”—working “through the existing affiliate system”—may not be the most formidable option anymore. He also said that should things progress a bit in the near future, he could see HBO Go becoming available to any Internet user who chooses to pay for it—as opposed to those who just borrow passwords from their friends.

“The broadband-only opportunity up until now wasn’t … at the point where it would be smart to move the focus from one to the other,” said Bewkes. “Now the broadband opportunity is quite bigger.”

Netflix work in that arena’s made the opportunity quite obvious. Aside from the grabbing such programs as the Fox show Gotham and Chelsea Handler’s new excursion into late-night almost immediately after they’ve become available, the company’s turned the streaming platform into quarterly revenues in the area of $1.34 billion.

Bewkes first hinted towards Time Warner’s willingness to go online during a quarterly earnings call in August, saying then that he’d want anything Time Warner did to be “best-in-class” online. If the streaming troubles Game of Thrones fans experienced during the airing of certain episodes is any indication, the company’s not quite reached “best-in-class” yet.

Bewkes stressed Wednesday that Time Warner has found moderate success streaming HBO Go to online subscribers in Finland, Norway, Sweden, and Denmark, and stressed Wednesday that it would be a “good thing for optionality in the longer-term back home.” He also spoke of some data he plans to introduce soon that would speak to the success of a joint experiment with Comcast affording current subscribers TV channels, broadband access, and HBO Go for $50 a month.

“It’s showing a very good demand for HBO Go,” he said. “We have the rights. We can do it if we want to now. But we don’t want to do anything that’s not at a high level.”