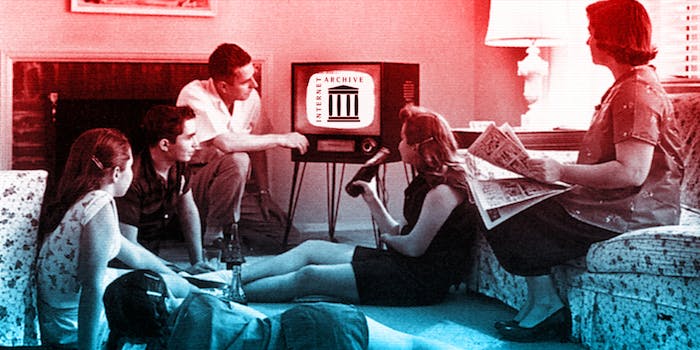 In Philadelphia, every political ad will be searchable before the Nov. 4 election.

The Internet Archive is debuting a new program in the Philadelphia TV market in which every political ad will be searchable before the Nov. 4 election. The Archive’s volunteer-assisted dedication to indexing important chapters of history has become its quiet strength, and now it’s attempting to help shape the future in real time.

Earlier this year, the San Francisco-based nonprofit began digitizing the incredible VHS collection of the late Marion Stokes, a Philadelphia woman who recorded the local and national news every day for three decades. Her son, Michael Metelits, told the Daily Dot he hoped her collection might help people with a narrower view of politics get a sense of the “historical sweep”:

“This isn’t the first time Afghanistan’s been a problem, this isn’t the first time a particular politician has been in the news. This is going to provide a sense of the rhythm of news stories, for people searching for a particular politician. My hope is that it deepens public perception of not only how news was made, but the actual politics underlying the news, to help people have a more informed, intelligent engagement with politics.”

The same reasoning could apply to this new project: All the info about political ads in that market will be searchable 24 hours after airing, and content will be viewable online. It’s crowdsourced fact-checking and reporting on a regional level, making the public the watchdog. If it works, Roger Macdonald, director of the IA’s television archive, could see it migrating to other cities.

“We’re evangelists for the perspective of open,” he says. “We try to demonstrate practical implementations… a series of data tests at scale, for what society could do. […] We’re kind of a friendly library bridge between the disruptive techlandia and more scleric ways of treating media.”

Philadelphia is the fourth-largest market in TV, and within the diverse city, according to Macdonald, there are three very contested congressional elections for the House of Representatives. This year, wherever there are key battleground races, there could also political “dark” money. So how could the public map that? Macdonald references a project done by MIT’s Center for Civic Media, that utilized the IA’s TV news archive and mapped coverage of the Trayvon Martin murder case via Media Cloud, offering a bigger picture of the bias, trends, and agendas that went into the reporting.

The Daily Show and, more recently, John Oliver’s Last Week Tonight are good examples of how to effectively set up and utilize the “gotcha” clip of a politician or government group. Macdonald agrees the IA could facilitate that for this new project, but admits the writers at the Daily Show are much funnier.

“We’re just a library, but what the Daily Show has really demonstrated is just one of those use cases. The gotcha. And that’s not trivial. That’s pretty deep. That’s a tool of accountability, and may well shape people’s future behavior. But others feel that that just scratches the surface.”

In 2012, the Sunlight Foundation, a D.C. nonprofit that advocates for transparent and open government, debuted Political Ad Sleuth, a database that tracks the number of political ads in different television markets, as well as the “dark money” behind them. (You can do a little influence exploring here.)

In a blog posted July 1, the group provided a state breakdown of some of the ads being tracked, such as Koch brothers- and Generation Opportunity-funded ads in Lake Charles, La., and found airtime has been purchased through November.

Kathy Kiely, the Sunlight Foundation’s managing editor, says the number of stations required to file online went from 230 to roughly 2,000. Before July 1, that Lake Charles market didn’t have to file. Now, it will be easier to see if there’s critical reporting or fact-checking happening in those markets, and, possibly, who let the dark money in.

“We thought we’d organize volunteers and build a tool and allow people to crowdsource this info,” Kiely says of the Political Ad Sleuth. The Philadelphia project will archive TV contract info so it’s searchable by time and date, and you can “actually trace the ad to the group, and then the money behind it.

“It will also make the broadcasts [around the ads] available,” Kiely explains.

Kathleen Hall Jamieson, a professor at the University of Pennsylvania’s Annenberg School for Communication, is a champion of the project, and stresses its importance for journalists as well as communities.

“Archiving political content makes it possible to track political trends across time and assess media effects that would otherwise be missed because scholars couldn’t access the messages producing effects,” she says. “Accessible content also increases the advocacy community’s ability to hold those issuing the messages accountable for their content.”

The Internet Archive’s database for this project won’t be up until August, but Macdonald is hopeful.

“We’re breaking a lot of new ground,” he says. “And it’s not just the Archive. It’s the Archive and those who come to us saying, ‘We’d like to do this, how can you help us?’”