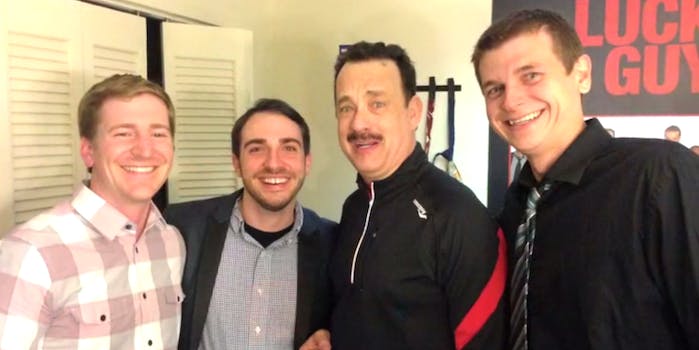 It takes but a dream, some VHS tapes, and $9,000 to build a village dedicated to Tom Hanks.

It takes but a dream and some VHS tapes to build a village dedicated to Tom Hanks. To take that celebration worldwide, a handful of buddies from the Great North believe it’ll take more than $9,000.

That’s the amount of money Kevin Turk and some friends are hoping to raise via Kickstarter to create International Tom Hanks Day, a charity-oriented multi-city celebration of the world-renowned actor to be held each year on April 1.

Wait, April Fools? You sure this ain’t a joke?

It happened again the next year. And the year after that. And so on. After a while, the man behind Philadelphia finally found out.

“Turns out Tom Hanks was all for it,” Turk says in the campaign’s video pitch. “He wanted to send us signed posters, DVDs, Wilson volleyballs, and anything he could think of.”

Turk and crew took each item and resold them via auction, sending the money back towards one of Hanks’ favorite charities. That also started to happen each year. Now they’re hoping to take it nationwide.

Turk’s goal is to build a website that aligns the many watch parties in various cities. “We want to develop a global website where consumers can purchase official THD merchandise, where party hosts can buy merchandise for their parties, and where everyone can stay updated on the latest THD news and gatherings,” he writes.

“We want to empower anyone and everyone to be able to throw an International Tom Hanks Day gathering.”

As chapters grow, Turk and his buddies will reach out to offer support, post tips for promoting watch parties, and facilitate the sales and distribution of various merchandise and memorabilia.

They’ve raised $1,800 already and still have 38 days to go, but the clocking’s ticking twice in their cases: April 1 is only 68 days away.

Perhaps they want to get in touch with these guys.