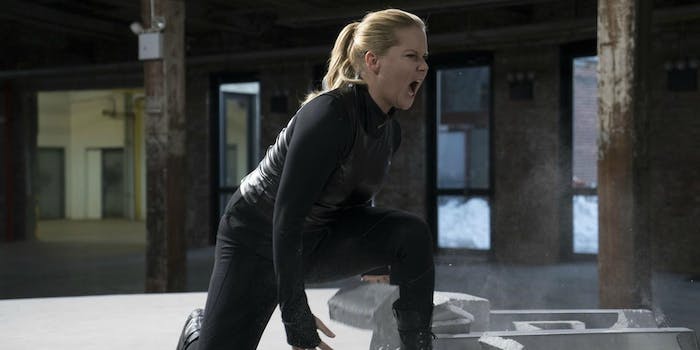 The latest season of the Comedy Central show turns a corner.

In episode 1 of the new season of Inside Amy Schumer, the show’s star comes across Tina Fey, Julia Louis-Dreyfus, and Patricia Arquette on a hike. They’ve gathered to celebrate Dreyfus’s “last fuckable day,” when the media deems actresses unfuckable and they can finally stop trying to be desirable. They have a funeral for Dreyfus’s looming unfuckability, and Schumer stands in terrified awe of what’s to come for her. The sketch is so funny, you almost forget Schumer’s critiquing a very real, persistent issue. This is the magic of Inside Amy Schumer.

Season 3 of Schumer’s Comedy Central show—which just won a Peabody and got picked up for a fourth season—comes at a time of ubiquity for the comedian. She’s starred in a webseries, hosted the MTV Movie Awards, and is about to release Trainwreck, a movie she wrote and stars in. Schumer’s humor doesn’t resonate with everyone, but with Inside Amy Schumer, she’s managed to elbow out a space where women can do and say whatever they want, and in turn address issues in a way you don’t often see on TV.

Season 2 saw Schumer push boundaries more, tackling body-shaming, slut-shaming, the gender politics of The Newsroom, and awful dating apps (c’mon, you know a M’Lady). In one episode, she explores the plague of rape in the military using the medium of a video game—and manages to make it both funny and infuriating. (Keep in mind this show follows Tosh.0.)

In the new season, Schumer takes aim at sexual assault with a jaw-dropping sketch about a small-town high school football team and magnifies the issue of women’s access to birth control with an ad that shows Schumer asking every man in her life if birth control is “right” for her. She addresses the wage gap by embodying the girl who’s always “cool with it.” She attempts to demystify our cultural obsession with ass while suggesting women own theirs.

There’s a reason Schumer resonates with many women (and men): She drinks, gets high, gets depressed, is freely sexual, talks about body issues, and dissects how women interact with one another. She’s of course dealt with her share of men who don’t think she’s hot enough to be on TV or in films, both online and on her show. In having control of the gaze, she dismantles masculinity on her terms. In episode 3 of the new season, she rips up the fabric of this idea.

The entire episode is devoted to spoofing 12 Angry Men, repurposed as 12 Angry Men Inside Amy Schumer. The men (Jeff Goldblum, John Hawkes, and Paul Giamatti are among the 12) sit around in a stuffy room, debating whether Schumer is hot enough to be on TV, which is another play on season 2’s “focus group” sketch. It unfolds like a parody of the classic movie, but the actual conversation still takes place in boardrooms and comment sections. During a recent interview at the Tribeca Film Festival, Schumer said they approached Comedy Central with some trepidation about the sketch, but the network ultimately put its trust in her team: “We always come so ready to fight,” she said, “and they’re like, ‘Yeah, you can say pussy. Who cares?’”

Last month at South by Southwest, Schumer stood in a spotlight on stage at the Paramount Theatre after Trainwreck debuted to a packed house. Next to her, director Judd Apatow explained that this movie came to be because he heard Schumer on Howard Stern and thought she needed a platform to tell her story. In Trainwreck, Schumer plays Amy, a writer at a Maxim-esque magazine called S’nuff, who’s freefalling through single life until she meets a guy who makes her want to change (Bill Hader). Sure, that plot is well-tread, but it’s Inside Amy Schumer writ large: the vices, the sex, the body issues. She also explores a complicated relationship with her sister (played by Brie Larson) and ailing dad (Colin Quinn).

After the SXSW debut of Trainwreck, Schumer performed standup to roughly 300 people at Austin, Texas, comedy club Esther’s Follies. She talked about how Trainwreck came to be and how she didn’t think they’d want someone like her to actually star in it: She wasn’t model-thin or attractive enough. (Schumer described her look as a kid as a “jack-o’-lantern with tits” who didn’t lose her teeth until fifth grade but had her period.)

She explained she thought she’d just be behind the scenes with a “messy bun,” but they wanted Schumer to be the star. She just had to stop eating and get a trainer.

“But then I was like, ‘Maybe I don’t need to do anything,’” she said. “They asked me to star in a movie. Am I maybe gorgeous?… But then my stunt double was a guy.”

The great Tilda Swinton, who plays Schumer’s boss in Trainwreck, wrote a poem about her in the new Time 100 issue, explaining, “She’s the one who misses nothing: who buys no bullsh-t, fitted with a radar as keen as a rabbiting spaniel.” There’s been talk about how Inside Amy Schumer is sneakily or subtly feminist. Perhaps that was necessary for it to evolve into what it is in season 3, but now there’s nothing subtle about it.