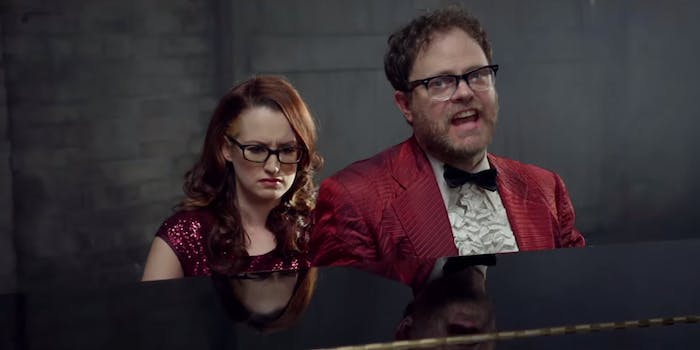 It gets out of control pretty quickly.

Ingrid Michaelson isn’t taking crap from anyone—especially not the men who took over her music video.

Having already teamed up with SoulPancake in the past with “Little Kids. Big Questions.,” Michaelson figured bringing Rainn Wilson along for the ride seemed like a no-brainer, so he and and eight other comedic actors brought havoc with them for Michaelson’s “Time Machine”music video. It’s not a romantic song, and it manages to smash a bunch of romantic clichés (not to mention a bouquet of roses).

It’s both fun and entertaining, giving us a better idea of what it’d look like if men played the typical women’s roles in music videos.

Besides, where else are you going to see Donald Faison serenading you in a giant bath tub?

“When I came up with the idea for this video, I had no clue how to get these guys involved,” Michaelson told BuzzFeed News. “I’ve never loved being upstaged so much.”