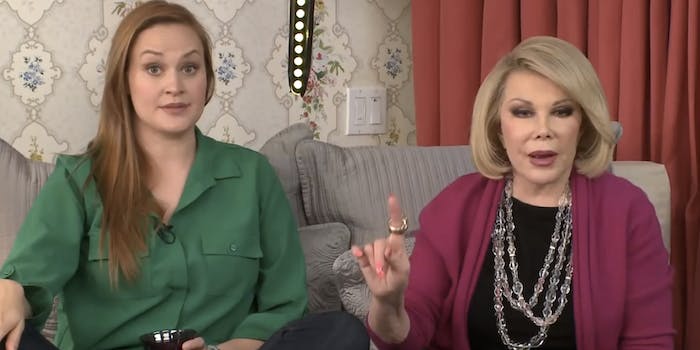 The comedy icon invited the stars of YouTube between her sheets.

Joan Rivers was more than just a comedy icon; she was a trailblazer across every avenue, including YouTube.

At 79, after a rich career in the media, Rivers decided she wanted a YouTube show too. As a workaholic at heart, she became collaborating weekly with celebs and fellow YouTubers begining in March 2013. She last posted just a week prior to her death. While she had many amazing moments on the show, the ones where she connected with the rising crop of YouTube stars particularly stick out as showcasing Rivers’s legacy not only as a legend, but also as a mentor to a new generation of comedians.

We’ve rounded up the best moments she spent with the YouTube elite during her short tenure on the platform, from talking about waxing before childbirth with Tyler Oakley to Minecraft with iJustine.

iJustine was Rivers’s first YouTube celebrity on the show, and she hit the ground running, talking about which nationality is the hottest and how livestreaming changed Justine’s life and living situation.

Oakley was a rare male YouTuber to share Rivers’s bed, and the duo discussed his coming out, his charity work, and what it’s like to date as a digital celeb.

Hannah Hart donned a tuxedo onesie to snuggle with Rivers, and the duo talked about Japanese comedy, coming out, and Hart’s ability to raise hundreds of thousands of dollars from the Internet. When Rivers asked if she could ask for fans to fund a plastic survery, Hart told her she didn’t even need it.

Mamrie Hart gave a heartfelt toast at this year’s Streamy Awards to honor Rivers, who invited Hart into her bed to discuss fake eulogies for celebrities and, of course, to drink.

Helbig joined Rivers in bed to divulge her pageant past and discuss the jump from YouTube to filmmaking with her Camp Takota project.

Furlan holds the distinction of being the only Viner to grace Rivers’s sheets, and she explained the six-second phenomenon to Rivers, as well as how she lost her virginity and her adventures in scandal at the Daytime Emmys.

Marbles joined Rivers in bed to talk about her breakout channel and her background in sports psychology and counseling.

Eichner may be a big TV star now, but he got his start on YouTube terrorizing the streets of New York with pop culture questions. Rivers was an early proponent of Eichner’s comedy, and even suggested him to the Letterman booker personally.