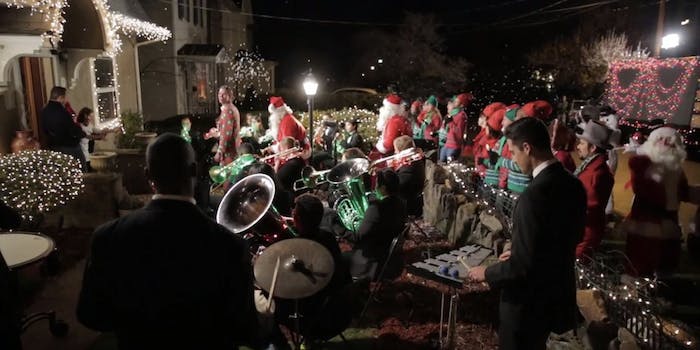 Charlie Todd, the man behind the “No Pants Subway Ride,” is bringing his gleeful brand of surprise-based public performances to Christmas. As a part of Improv Everywhere, a New York City-based “prank-collective,” Todd created and directed a Christmas prank of epic proportions. Armed with a team of no less than 13 carolers and a 20-member brass band, Todd surprised a Bergen County, N.J. family with a caroling visit for the ages.

The visit begins with the Schreiber family opening their door to a modest group of four festively dressed carolers. After some good old-fashioned caroling, the group grows to include a small army of caroling back-up elves and a dramatic brass band. Christmas lights strung from a truck start twinkling, and soloist Aaron Jackson changes costume and serenades the family with an upbeat rendition of “A Marshmallow World.” Finally, four Santas accompanied by dancing snowmen join the party and shower the family with snow. The effect is nothing short of a Radio City Christmas Spectacular on your front lawn.

According to Todd, he’s had this prank in mind for years, but due to the scale and cost of the stunt, he wasn’t sure he could pull it off. When Target approached him earlier this year and asked to sponsor an Improv Everywhere holiday event, Todd pitched the idea. After some logistical tweaking, including renting a house and finding families who would be open to a holiday surprise, the Improv Everywhere team made Todd’s Christmas prank-dream a reality.

For more on how Todd and his team created this epic feat of caroling, check out the Improv Everywhere website.