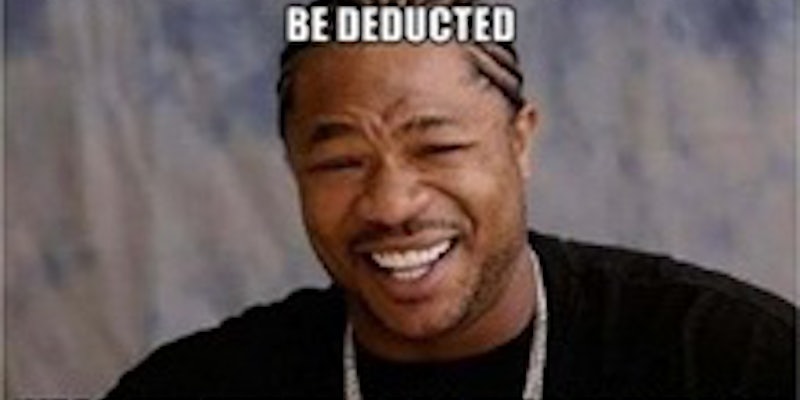 The only thing redditors hate more than repetitive visual memes are college students who don't know how to make them.

College students around the world have discovered image macros, those jokey captioned pics which first grew popular on sites like Reddit—and redditors don’t like it one bit.

Or, as one might express it in the language of image macros:

“Some people started a Facebook page for memes at my university,” wrote redditor sweetteaking. “I don’t think they get it.”

Image macros play off both the picture used and each other—a sort-of funny inside joke repeated until it becomes hilarious. Each one has its own peculiar grammar. But the Facebook page in question seems completely unaware of proper macro usage.

In case you, too, are amongst those wallowing in meme ignorance, that’s the Successful Black Man. The top line is supposed to play on a racist stereotype (“I pulled out my nine …”), while the second turns the stereotype on its head (“… iron and played some golf”). This passes for high humor on Reddit.

And if the Reddit thread is any indication, colleges are suffering from a veritable outbreak of meme fan pages that demonstrate a shocking misunderstanding of the medium.

“Oh god, mine too,” wrote redditor whatisthis8, in a common refrain in the thread.
“It’s horrifying.”

That redditor linked to the Boston University page. If you’re afraid to click through, here’s just one example: the Socially Awkward Penguin, put in a position that seems neither social nor awkward.

“These just make me so sad inside,” redditor FAUX_REAL_  wrote.

These college meme pages pale in comedic purity to the gold you can find at Reddit’s image macro factory, r/adviceanimals, every day, redditors suggest. Reddit’s meme auteurs would no doubt recoil in shocked disgust if faced with these Facebook abominations.

But maybe the real irony isn’t the misuse of image macros at all.

Many longtime redditors blame image macros for polluting Reddit with low-quality content. The easily-made and replicated images, many believe, have turned the social news site into what one redditor once described as a “cesspool for breeding Internet culture.”

Redditor RarecandyXX may have put it best: “I am able to find a warm irony in Reddit getting upset about people misusing and misquoting overused humour.”

In fact, if you’re a frequent Facebook user, you’ve probably noticed your news feed has become more image-heavy. That’s thanks to the Facebook redesign last spring, which began pumping larger image thumbnails through your News Feed.

So perhaps the real problem isn’t that college students are misusing image macros on Facebook. It is, as the Daily Dot’s Jordan Valinsky argued last week, that Reddit is invading Facebook.

Earlier today, another redditor posted an album of anti-image macros to r/adviceanimals—each a quick, simple demonstration of just how banal most of the predictably written jokes really are.

So it’s true that some college student failed to grasp the real meaning of the Successful Black Man. But was he missing that much?