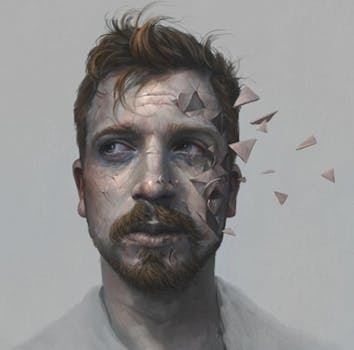 Sam Spratt does everything from rage faces to fine art—and his fans approve. Hear what he has to say.

A former chief artist for Gawker and Gizmodo, illustrator Sam Spratt has achieved Internet fame through his takes on pop-culture figures and Web iconography, such as his spin on a number of more evolved meme faces.

While he’s well-regarded on Facebook and Twitter, with 19,000 fans and more than 6,500 followers, respectively, he’s best known for his work on Tumblr, where his posts regularly receive thousands of reblogs and likes—and for good reason.

Spratt has given those who are curious about his methods some insight into the process with some time lapse videos on his YouTube channel, including this one of his take on the “X ALL the Y!” meme:

He often gives fans an insight into some works-in-progress on Tumblr as well, including a portrait of The Hunger Games’s Katniss Everdeen, which was drawn at the behest of his followers.

The Daily Dot had the chance to chat with Spratt about Tumblr, his work, and the Web at large.

The Daily Dot: There’s been at least one instance I’ve seen (Inspector Spacetime) where you’ve made a change following suggestions from your followers. How does the feedback loop on Tumblr, Facebook et al find its way into your work?

If you make… anything, and are using Social Media solely for self-promotion and not for actual interaction and self-improvement — you’re just an advertisement. I’ve been lucky enough to have a good amount of people take interest in my work and while I primarily try to reciprocate this by answering questions and interacting with everyone possible, behind-the-scenes I let it trickle into my work itself. When I’m working on non-client illustrations, I observe the “hivemind’s” opinions and sometimes will make changes to existing pieces, and more often — let the lessons learned from a previous illustration (both positive and negative) carry over into the next one.

When you work on one piece for several to dozens of hours, it starts to become so familiar that you get something of a blindspot to its flaws. A second set of eyes is really helpful just to say “Sam, that ‘a’ looks like an ‘i'”, or in my case, thousands of eyes saying “SAM, WHAT THE HELL MAN, IT LOOKS LIKE INSPECTOR SPICETIME. SPICE! WHEN IT SHOULD BE SPACE! DO YOU WANT TO BE MY LOVER? OK WELL YOU’VE GOTTA GET WITH MY FRIENDS FIRST, GOSH!” The message got across quickly and I managed to make the simple change before the image went viral. It’s just important to figure out how to filter through fan-biases, nonconstructive feedback, and stylistic leanings.

DD: What led to you painting the evolved meme face series?

I was fascinated with how people had created what I consider to be a standardized visual vernacular for the Web. Meme faces/Rage Comics are simultaneously stupid and utterly brilliant. The people that write them off are largely people who think that because the average person is using some comics-generator on the Web with these existing poorly-drawn characters, that obviously no intelligent ideas or profound ways of looking at the world could be achieved.

However, anyone on the Web who has seen these will probably tell you that they’ve seen at least one that describes some incredibly obscure, mundane activity that every person experiences in isolation and thinks to themselves “man, this is probably JUST me,” now simplified in a humorous, viral and visual manner — spread wildly across the Internet in a communal acknowledgment of our collective weirdness. It lets us know that other people struggle with the same hardships we do or did when we were younger… like seeing a Lego piece, moving on, needing that piece later, failing to find it, then later stepping on it and screaming out in pain.

Making “evolved” versions of these faces was as much fun as it was a perfect outlet to give art elitists something to bitch about. You’d be amazed at the amount of “Ugh, why did you waste your time drawing such lowest-common-denominator subject matters?” messages I have received. If I want to paint something in the fine-art realm — something deep and personal — I’ll do it. If I want to paint something creepy and weird, I will. If I want to paint something happy and cute, I will. I will do these things because, like anyone, I’m happy, sad, thoughtful, (occasionally) funny, immature, and serious — and I’m not going to make everything I do consistently brooding and solemn (or surface and light-hearted) just to build a brand, nor will I avoid drawing things I want to because they don’t fit into the arbitrary and imaginary guidelines of the gallery-going-art-snob.

DD: Of those paintings, which is your favorite and why?

I’d go with the “LOL” face, simply because the anatomy of the face is more dimensional than the others, so there was a bigger technical challenge to bring it to life.

DD: Which of your pieces have proven to be most popular on Tumblr? How popular have the Web-inspired drawings been compared to those with a more general pop culture flavor?

SS: I’d say the absolute most have been the meme faces, Ron Swanson, Inspector Spacetime, Tumblr Beast, and Dwight Schrute. I’m not sure which has been more popular, however, I know each of the pieces mentioned has been seen by literally millions of eyeballs, thanks to Tumblr, Twitter, and Facebook users spreading them around, being picked up by major outlets, passed along by celebrities, hitting the front page of Reddit, and so on. It’s been wild — not everyone is a potential buyer of my work, but they are all potential sharers — and that’s really been an amazing thing to witness.

DD: How much inspiration have you found on Tumblr through your own browsing? How does it compare with the likes of Facebook, Twitter and Reddit in that regard?

I think Facebook, Twitter, and especially Reddit — are amazing places to pick up nuggets of news, inspiration, ideas, and so on. But Tumblr, because it is so image-centric, will always be the best for just casually absorbing content—Not even picking out individual things you like, just scrolling and pausing and scrolling and pausing, letting the Web trickle into your brain. When I started Tumblr like a year and a halfish ago, I followed back the first few thousand blogs that followed me. Eventually that got out of control to simply go through tens of thousands of names and follow back, but a simple refresh of my dashboard and I get a pretty large sampling size of the various tastes of the people I follow.

DD: Which are your favorite Tumblr blogs? Which other websites do you visit regularly?

SS: I enjoy the staples like Frogman, EatSleepDraw, Rampaged Reality, and various illustration collectives as far as Tumblr goes. I worked for about a year as an illustrator at Gawker Media so I frequent Gizmodo, Lifehacker, and Kotaku out of habit. I picked up an appreciation of tech journalism so I check out The Verge often, and then I read probably too much of Vulture as I (shocker) love the television industry.

DD: How much of a split is there between creating commissioned pieces, working on your own ideas, and drawings suggested by your followers?

SS: I’d say it’s generally a 50/25/25 split respectively. Right now more of a 100/0/0 split as I’m working on an awesome illustration project with one of my favorite actors/musicians. Making fun viral illustrations, pop-culture art, personal paintings, and all that is amazing — it’s my favorite thing to do, but it’s also part of my job. I’m a freelance illustrator and since I don’t want an agent or rep right now, I use what I love to do as my advertising. Painting pop-culture subject matter is great because it’s so thoroughly integrated into my interests. However, as I mentioned before, though not everyone will purchase my art, they might share it, and furthermore, they might share it with someone who will purchase it.

My professional career has a existed since I graduated college in Summer 2010, and ever since then, I’ve been fortunate enough to not hunt down any clients thanks to the ever-true “If you build it, [they] will come” butchered paraphrasing from Field of Dreams business model. By doing these pop-culture and viral illustrations, millions of people see them, tens of thousands will visit my sites, hundreds will inquire about commissions, dozens will be able to afford them, and of those dozens will be famous musicians, major publishing companies, news outlets, advertising agencies, game developers, and so on.

When an illustration costs thousands of dollars, these dozens that pop up when anything I make gets a lot of traction on the Web, it’s more than enough to live a comfortable life. I get to do what I love, what I love also serves as my advertising. My advertising brings me a steady stream of clients, which brings a steady stream of greenish paper, which allows me to continue to do what I love comfortably, occasionally giving away free work as thanks for the support, or taking requests to give my spin on something the masses are interested in.

DD: Has anything surprised you about the Tumblr community?

It surprises me constantly. Maybe it’s because in my following-back spree, I got such a wide range of demographics to observe so I’m in less of a bubble than on other outlets. But the Tumblr community has blown me away. Not only have I learned an IMMENSE amount about so many different kinds of people, belief systems, and struggles — but when I give the opportunity for anonymous questions (and I’d say the split between positive and negative is 90/10) that’s pretty mind-blowing for the often criticized Internet masses. I think it has very little to do with me, but rather that the viral Web isn’t just used for Internet memes and illustrations, but also for spreading tolerance and forward thinking.

That’s not a universal/black & white/fuzzy statement. It’s used for terrible things as well, but what I’ve seen on Tumblr about acceptance of skin color, body image, sexuality, religion, and gender — and the immense amount of traction these things have with current teens, is something that even at 23 years old, I can say was completely absent in my highschool years. It’s incredibly encouraging knowing that with better tools of spreading ideas, there’s some good coming from it in between Instagram photos of food and duck faces.