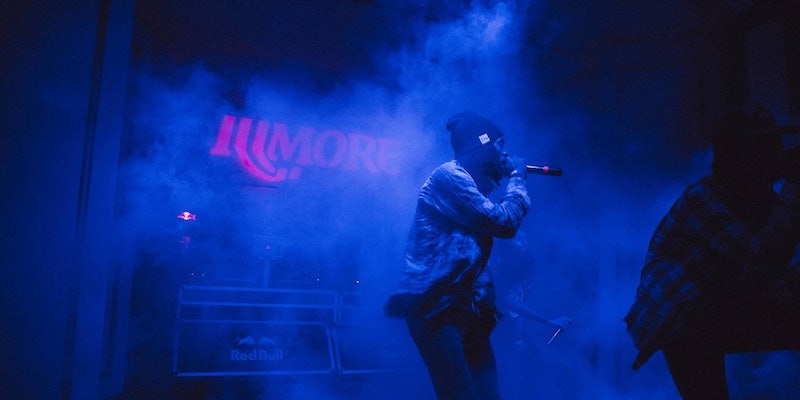 At the end of the Illmore, rap’s most mythical after-party

The Internet canonized the Illmore. Did it destroy it?

Claire Bogle doesn’t want to tell me the password.

“It’s like the briefcase in Pulp Fiction—you’ll never know,” she says.

Tall, blonde, rocking a black leather jacket, and speaking with the dialed-in composure of a made pro well beyond her 26 years, Bogle is the coolest person to hang on the Scholz Garten rooftop since the German-themed bar opened in 1866. She’s talking to the Daily Dot late Saturday in Austin, Texas, about the end of the Internet’s most FOMO-inducing hip-hop house party, the Illmore. But she doesn’t want to tell me the password that’s been the bane of existence for fans online.

For the first time since 2011, Bogle, who co-owns concert promotional hub ScoreMore, opened up her guarded and viral event to the Internet during SXSW. To get in, the kids on Twitter needed a password to enter a website that—for an instance so fleeting it’d make Ticketmaster blush—let you purchase three-day wristbands.

“We wanted the general public to be able to experience what we’ve been doing,” Bogle says. “If we’re going to go out, might as well invite everybody.”

The New York Times noted that at 2.5 percent, the Illmore has a lower admission rate than Harvard. (Disclosure: The Daily Dot coincidentally shares a PR company with the Illmore, which this reporter learned upon arrival.)

Security is layered and uncompromising at the event. On Friday, police halted rap duo Rae Sremmurd’s loose, anthem-churning set about 15 minutes early because the main hall, according to security, vastly topped out its 540-person capacity.

After hosting a generation of rap’s brightest heroes since 2011—Kendrick Lamar, Lil Wayne, A$AP Rocky, Future, Chance the Rapper, and Drake, who was in last year before a European scheduling conflict—the invite-only SXSW party is ending tonight.

“Everything’s just king of changing,” Bogle says. “South by is transitioning as well. …We felt we should kind of go out with a bang.”

Unfortunately for Bogle and ScoreMore co-founder Sascha Guttfreund, the Reddit haters are here. And they’re drunkenly booing what should be a feel-good reunion show by Chicago clique the Cool Kids. 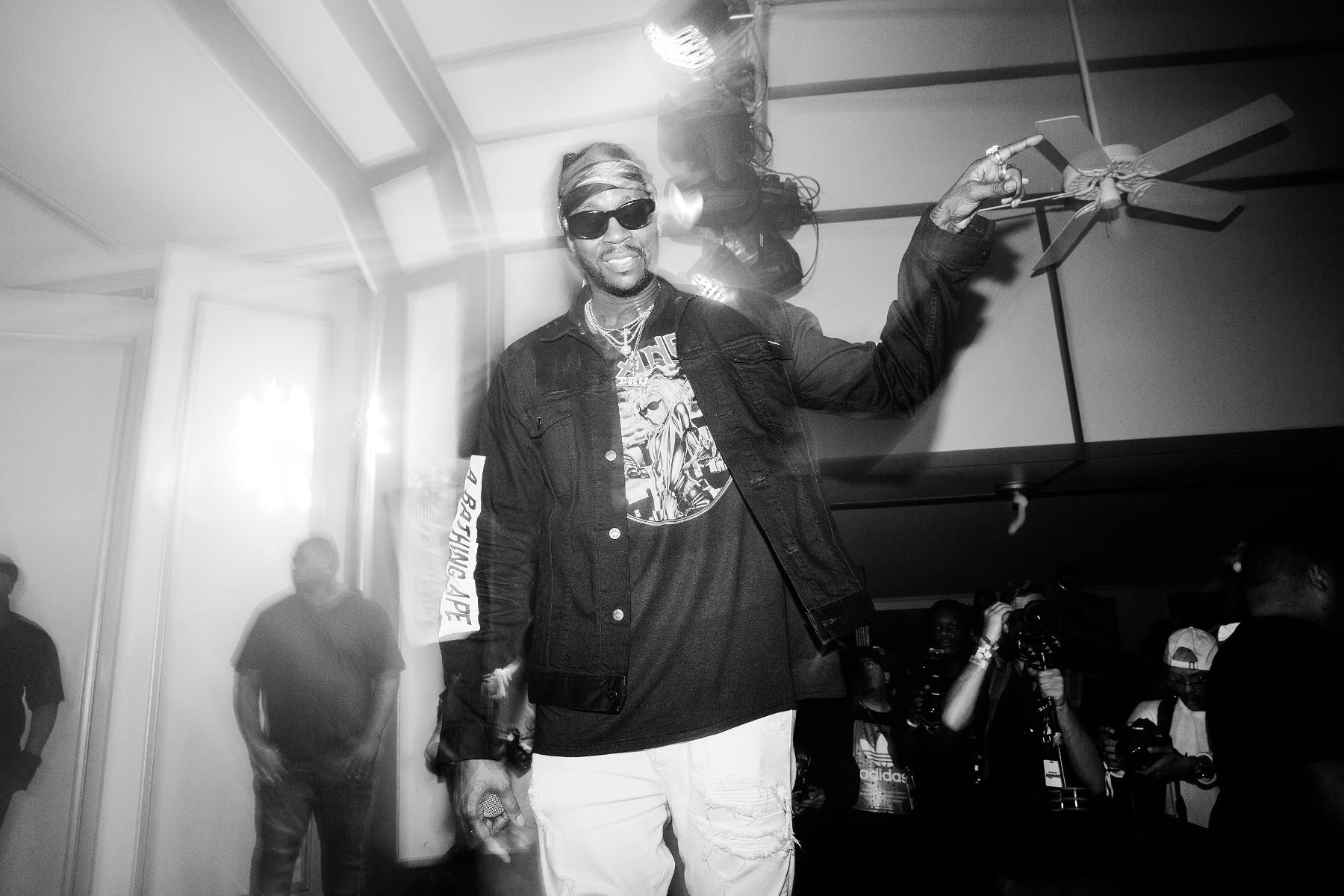 The Illmore was never supposed to be a concert. At its core, it’s a house party. Performances are loose and subject to last-minute texts. Behind me, rap trio the Outfit, Texas, mingles by a foosball table. A young man standing near the backstage bowling lanes has a plastic baggie and is handing out blunts. 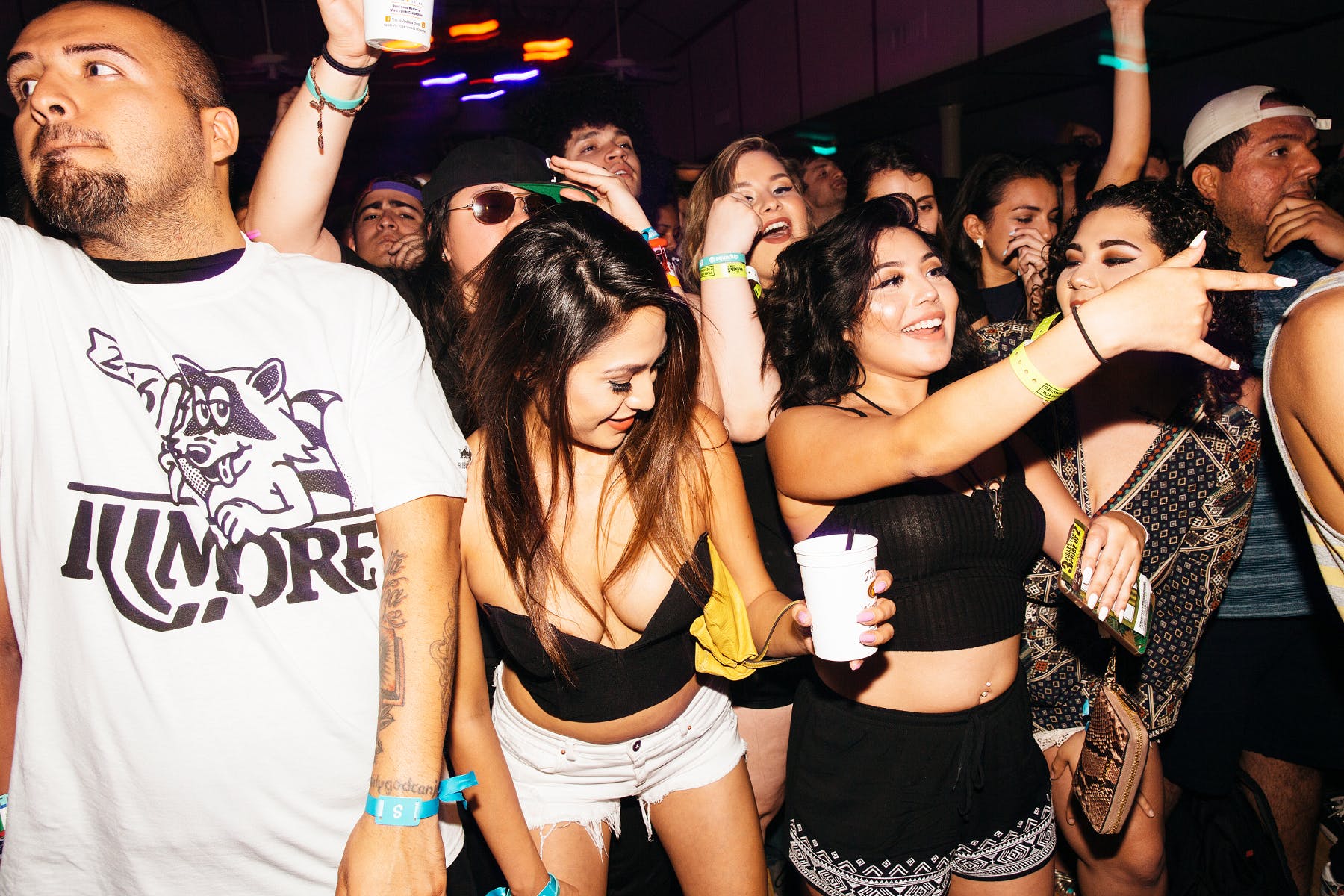 At its most essential, Chance the Rapper met producer Nate Fox in 2001 at the Illmore; the duo went on to write breakout SoundCloud indie record Acid Rap. DJs Diplo and Skrillex have spun back-to-back Illmore sets, and Bogle says that led to them partnering up to form Jack Ü.

Now that people bought tickets, however, they don’t want playful pass-the-mic freestyle sessions but a structured festival experience. The Illmore 2016 is dominated in running time by Metro Boomin’s radio singles (the St. Louis producer performed Friday night, but his inescapable hits droned over the PA all weekend), and people are growing restless. Shortly after 3am CT Sunday, an ocean of boos and chants of “fuck this shit.” On social media, it’s about the same:

Last night at #sxsw #anderson.paak does not show up at empire garage. #illmore is a mega bust. So disappointing.

And when Snapchat clips of Drake hanging out in Austin are stuffing timelines, no other headliner will do. Such is the double-edged sword of secretive, digitally branded SXSW live music.

As BuzzFeed noted last year: “The steady supply of rumors fuels an annual snipe hunt—everyone in town stands at the ready for a pop-up Kanye or Rihanna or Drake performance that, more times than not, never materializes.”

It’s fallen on Chuck Inglish of the aforementioned Cool Kids to save this thing. The duo played the first one of these five years ago and are here for what is supposed to be an epic sendoff.

“I came here and did this shit for free,” Inglish tells the thinning crowd. “Don’t boo.” 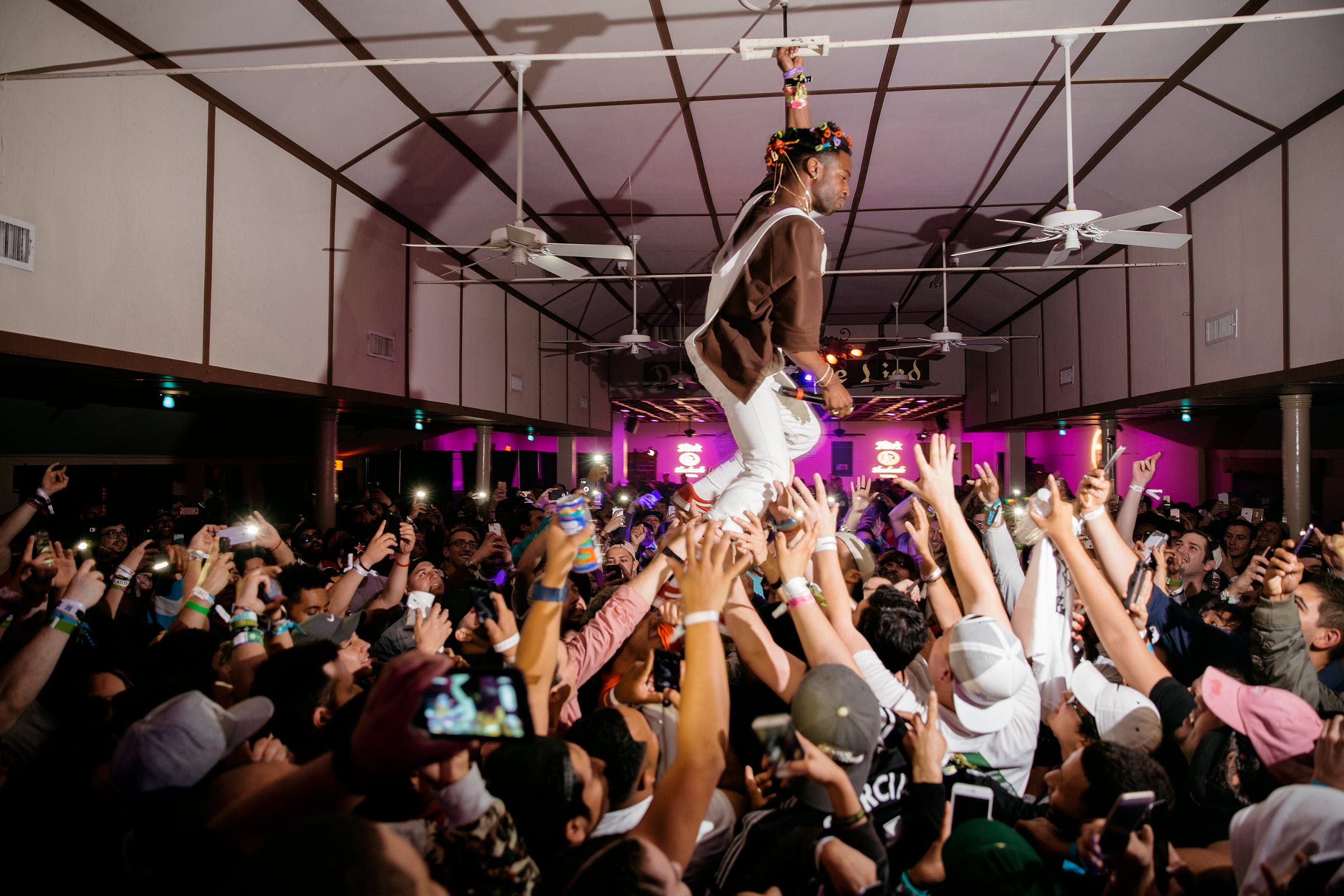 Bogle admits that the Web noise became a turnoff for her. I ask if the Internet killed this thing.

“I don’t think anybody ever has the power to kill the Illmore,” she says. “People use the Internet as an outlet to get out their aggression, and those people just don’t need to be here. It’s not for them.”

But she admits that “it just got too big.” Bogle clarifies: “The Internet is also kind of what made the Illmore.”

In another era, the Illmore—which has had to upgrade facilities to accommodate demand three years running—would have been able to quietly exist as a literal house party for well beyond that first 2011-2013 window.

“When we brought in more production it slowly transitioned to more of like what felt like a show,” Bogle says. “And it’s just been that way a little more every year, which is another reason we decided to end it because it’s not a show, it’s a party.”

This weekend, well, apparently Johnny Manziel showed up and bowled.

The three-day output of performances is a mighty list of captivating artists: 2 Chainz, DJ Drama, Desiigner, Dreamville Records, Flatbush Zombies, Jazz Cartier, Kehlani, Lil Uzi Vert, Lil Yachty, Texas legend Trae the Truth. The final, 20-minute set from Tory Lanez is a crowdsurfing coup from a rapper who will be twice as famous this time next year.

The point of SXSW is to wander and find new music—less so to gawk at celebrities. The reputation was shrouded by selling tickets to the unknown, but more importantly ScoreMore can point to its record of fist-bumping new names in hip-hop. It can bet on this lineup to look twice as impressive with time. 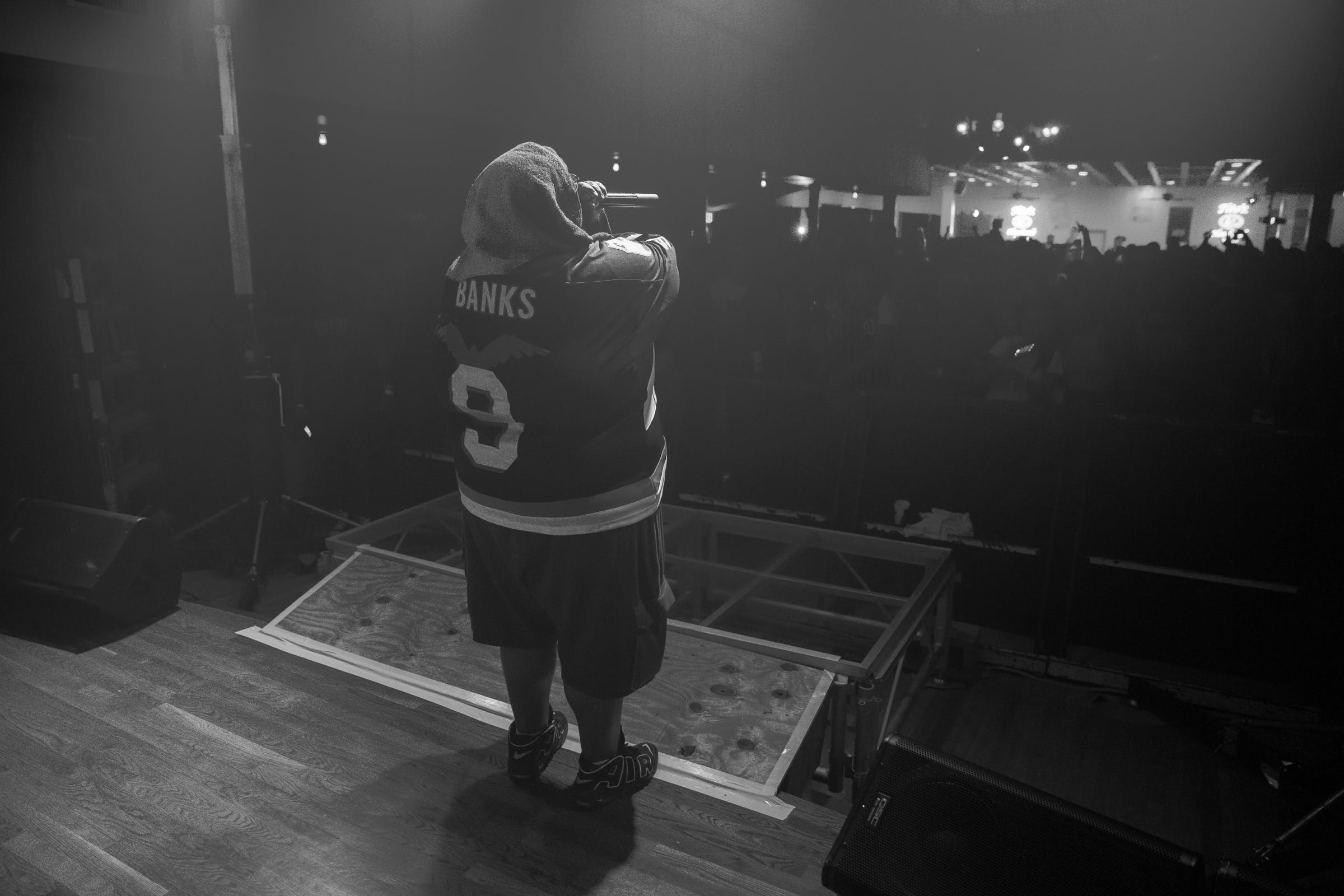 “I have zero regrets with the Illmore, I think we smashed it,” Bogle says. “I think it’s legendary, and I think it’ll always go down in history that way.”