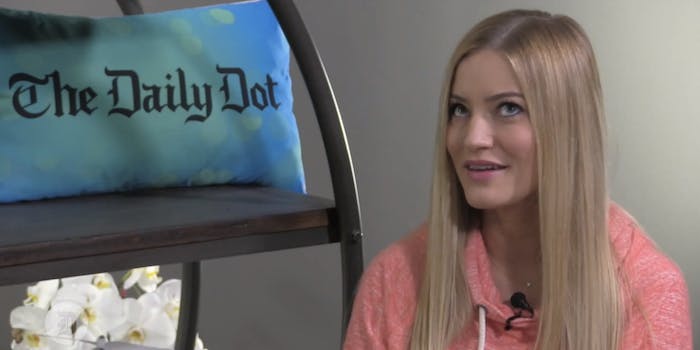 Activist Lizzie Velasquez turned the negative into a positive with her film.

When faced with bullying, the YouTube generation does what it knows best: turns the camera on and documents their struggles. That’s the genesis for A Brave Heart, a documentary that follows Lizzie Velasquez, a woman with a rare congenital disease that, among other symptoms, restricts her ability to accumulate body fat. Because of her condition, Velasquez has faced constant bullying, both online and off.

“[Lizzie] found this YouTube video years ago, and they had called her the world’s ugliest woman,” Justine Ezarik, better known as iJustine, told the Daily Dot. “It’s absolutely heartbreaking. But she took that and used that as inspiration to be a better person and to try and end cyberbulling.”

The film, which had its world premiere at South by Southwest, follows Lizzie’s daily life and her quest to have her extremely rare disease finally diagnosed.

“It’s her story, but she wants it to be everybody’s story,” explained Ezarik, who is an executive producer for the film.

The pair connected where Ezarik says she makes most of her friends, online.

“It all just happened because I commented on her Instagram,” she said. “She got excited because she watched my video, and then I got excited that she wrote back to me. I originally met her a couple of years ago in Austin because I was doing a panel. Two years later we’re here doing a panel together.”

Ezarik says documentary filmmaking is a natural extension of the YouTuber style, where documenting life on video is second nature.

Meanwhile, Ezarik is stretching her creative wings into book writing, with her debut coming this summer.

“There’s so many things I never really posted online,” explained Ezarik of the book’s content. I know people think, ‘Oh she posts everything.’ You don’t post everything at all; that’s crazy.”

The book follows her life and the evolution of social media during her tenure on all the platforms.

“I was always sort of nerdy and liked weird things and sort of I found my people on the Internet,” she said. “It’s kind of just letting everyone know that whatever it is that you like and whatever it is that you’re into, there’s other people out there. You just have to find them. I’ve been so lucky to find such amazing people out there that like the cool, crazy things that I do.”