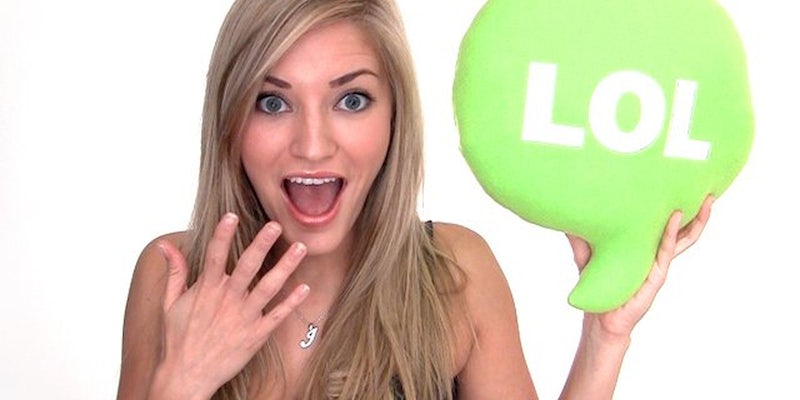 The evolution of iJustine

With her five channels, Justine Ezarik has established herself as one of YouTube's leading ladies.

Justine Ezarik could be considered the new face of YouTube.

Better known by her on-screen persona iJustine, Ezarik is one of seven YouTubers who have been given the opportunity to test out the new layout, which is still in limited beta, before it’s rolled out to the rest of massive video-sharing community.

And understandably so. Alongside Jenna Marbles and Felicia Day, Ezarik is one of YouTube’s leading ladies—an energetic pioneer of vlogging whose career has blossomed in parallel with the Google-owned company.

Since 2006, she’s been giving her audience a glimpse into her everyday life on YouTube, vlogging about anything and everything that strikes her fancy on her five successful channels.

On YouTube Creators blog late Monday, the 28-year-old introduced the changes for the channels and offered some tips, like creating channel trailers and art, for gaining new subscribers. Of course, she made a video about it as well.

“And it’s crazy how much YouTube has changed over the past couple of years,” Ezarik said about the layout changes. “I’ve had a channel since 2006, and in Internet time that is a freaking eternity!”

Ezarik originally became involved with making videos and learned to edit even before she started making channels. She studied multimedia at Pittsburgh Technical Institute and initially landed jobs as a graphic designer and a video editor.

An early adopter to YouTube, Ezarik received encouragement from viewers to make more videos, but it was a slow process; at that point, the YouTube Partner program, which enabled YouTubers to make money from ad revenue by allowing ads to be placed on or near their videos, was not yet in place.

It wasn’t until her infamous reaction video to getting a 300-page iPhone bill in August 2007 that things really took off for her. If there was a hall of fame for vlog entries, this one would make it. In the minute-long clip, which has been viewed more 3.3 million times, Ezarik flips through the entire stack of papers as iPhone commercial music plays in the background.

“It was just a weird video,” Ezarik told the Daily Dot.

“It showed me how many views and how many people it reached that there is something to this whole Internet thing, so I kept going from there.”

Around that time, she also launched her own reality-video blog on Justin.tv after doing a guest spot on founder Justin Kan’s channel where she began to film almost every aspect of her life (except the more private moments) for the Web for six months straight in what’s known as lifecasting.

She took the camera everywhere she went—sometimes even wearing a camera on her head. In essence, her audience never left her side. They were captivated by her daily life, and soon many of her fans felt that they had a sense of ownership of her life. Some even tried to vote off friends who made guest appearances on her show.

“The fans have that feeling that they do have a say, and even now they’ll make comments about people in my videos,” Ezarik said. “And it’s hurtful because my friends will read these things and it’s not very nice. So you have to pick and choose your battles.”

She reduced the amount of time she spent lifecasting (eventually abandoning her Justin.tv channel) and now just shares what she wants to share with the Internet, a process she said is “much easier.”

She still has to deal with backlash from fans after guest appearances from friends, but her audience tends to warm up to them after they’ve popped up on her videos a few times.

Ezarik has over 1.3 million subscribers on her main channel, and there are over 2,200 videos between that and her four side channels that feature iJustine.

The side channels (a vlog, a review channel, unedited iPhone videos, and video game commentary) came out of a desire to publish extra content that didn’t fit with her edited videos—and to allow viewers to subscribe directly to the content they wanted—in a similar manner to a DVD’s extra features menu.

She handles the video production and editing herself, and depending on the concept, it usually takes Ezarik about four to five hours to produce, shoot, edit, and post an easier video. The most important part of the process, however, comes after she hits “publish.”

“After that, a lot goes into making sure you’re commenting and keeping on top of that and promoting it through all your social networks,” Ezarik noted. “So even though that video might take a couple hours it’s pretty much a full-time process, babysitting it after it launched.”

Ezarik has also done her fair share of acting over the years. She’s had small roles on multiple television shows, regularly appears on the Fine Brothers’s YouTubers React series, and she has been involved with Web short-turned-TV-show Annoying Orange and Video Game High School.

But for Ezarik, she loves the instant feedback and constant adaptation that comes with producing content for the Web.

“If I post something and my audience doesn’t really like it or if they have other suggestions on how to make it better, I can take that feedback and instantly apply it to the next video,” she said. “So it’s a very interactive community and they’re definitely very vocal about things they like and don’t like.”

The feedback is already flowing in on the new YouTube design, with viewers weighing in loudly on both sides of the issue.

Ezarik may not have yet fully explored what the new layout can do, but as she does with her channels, she’s certainly adapting.