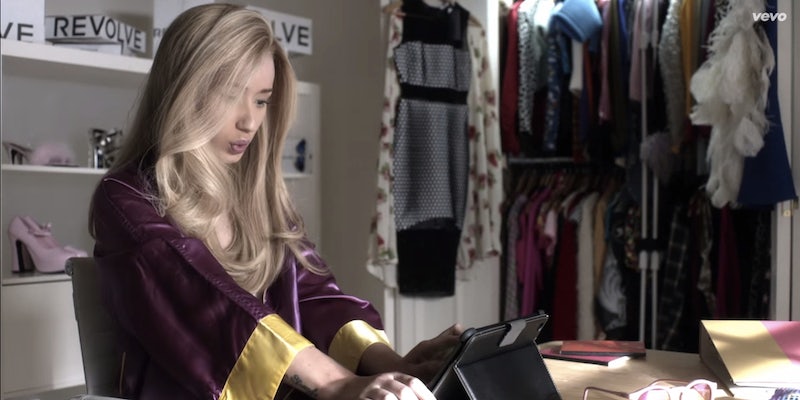 Iggy Azalea responds to criticism of her ‘blaccent’

Eve, Jill Scott, and Iggy Azalea weigh in on cultural appropriation in hip-hop.

Iggy Azalea took to Twitter yesterday to respond to the latest comments in the ongoing discussion of her musical style and her notorious “blaccent.”

This time, the criticism came from veteran artists Eve and Jill Scott, who appeared on Sway 45’s Sway in the Morning to promote their new Lifetime film, With This Ring. Sway asked the women to weigh in on the “ongoing conversation in hip-hop about cultural appropriation,” and they offered a balanced criticism of Azalea’s work.

Eve weighed in first. “I get it that people might be upset… but they grew up with our shit. … Hip-hop is everywhere. … Yes it’s from us, and it’s our thing, but … she’s representing a group of girls right now as well. … Let her do her thing. It’s not my cup of tea, but she’s representing for somebody.”

Scott then gave a pointed but thoughtful critique of Azalea’s style: “It’s a little challenging for me because I come from the era that she pulled from. To me it [sounds like] a mixture of Da Brat and Eve … but, you know, I’m a mixture of Sarah Vaughan and five other things…[Someone who] comes from that era could be looking at me like, ‘You aight.’” Scott identified Azalea’s tone as the issue. “It’s sounds like a big bite to me … the tone.”

“She’s from a different place, and I’ve said this before, it would be dope to hear her with her swag,” Eve said. “What are you, who are you, what is that?”

Scott and Eve agreed that Australians are “fresh” and “dope” and insist that Azalea has rich cultural material of her own to pull from.

Azalea responded to the comments on her Twitter with a similarly thoughtful tone, insisting that she is, in fact, being herself, and encouraging fans to be complex and multidimensional.