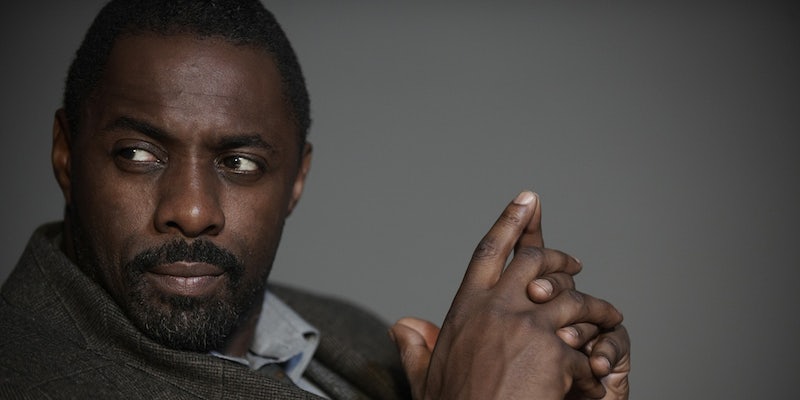 Photo via Tina Franklin/Flickr (CC BY 2.0)

When Anthony Horowitz, a British writer of young adult novels, was chosen to pen the newest addition to the James Bond oeuvre, he was understandably thrilled—telling the Daily Mail in an interview Saturday that “this is something I’ve wanted to do all my life.”

Unfortunately, Horowitz also let it slip that he thought Black actor Idris Elba—beloved by fans for his roles in Luther, Star Trek Beyond, and Beasts of No Nation—was “too street” to play Bond.

Weighing in about the many actors who have played the iconic Bond role over the years, Horowitz said his favorite was Daniel Craig because he brought “a total return to the gritty seriousness of it.”

The audiobook version of Horowitz’s Bond effort, Trigger Mortis, will be the first to feature a Black James Bond—voiced by Selma star David Oyelowo. Many have assumed that the film version would star a Black actor—especially because the leaked Sony emails of 2014 revealed that at least one Sony executive was pushing for Elba to get the role. Adding fuel to the gossip fire, in a Reddit AMA last year, Elba himself said he would “absolutely” jump at the chance to play Bond if the role were offered to him.

In addition to his acting talent, Elba has possesses the critical Bond quality of, well, smoking hotness. His sex symbol-status is so widely confirmed that Elba even became the first man to grace the cover of girlie mag Maxim solo, featured on the September issue.

Yet when asked about the possibility of Elba playing his Bond character, Horowitz told the Daily Mail that he wasn’t convinced.

“Idris Elba is a terrific actor, but I can think of other Black actors who would do it better,” Horowitz told the Daily Mail on Saturday before suggesting Hustle star Adrian Lester as his pick. “For me, Idris Elba is a bit too rough to play the part. It’s not a color issue. I think he is probably a bit too ‘street’ for Bond. Is it a question of being suave? Yeah.”

After massive public outcry from people who called the comments coded racism, Horowitz offered up an apology an said he was “mortified” by his poor choice of words.

By now it’s a by now familiar pattern: Hollywood type says/does something offensive, social media outrage ensues, Hollywood type offers apology with tail between legs. But somewhere in between, people on Twitter cracked some pretty good jokes that demonstrated just how not “street” Idris Elba—a 42-year-old Brit known for his classy-yet-smoldering sex appeal—actually is.

Idris Elba is handsome, urbane, confident. If he's 'street', that street is a gilded cobblestone cul-de-sac in front of a stately mansion

Meanwhile, Idris Elba probably puts on a tuxedo just to stop by the pub for a pint but noooooooo, he’s far too “street.” LOL.

If I could imagine anyone making a corner store run in nothing less than crisply ironed jeans and a fresh crew neck sweater, it's Idris.

He probably has one of those old timey shaving kits, like the ones you see in professional barber shops.

I bet he eats chicken wings with a knife and fork.

He seems like a guy who checks for dust on his furniture by running a gloved finger over the surface. That glove also costs $1000.00.

Sorry, what? Idris Elba is 'too street' to play Bond? Are you kidding me?

HAVE YOU SEEN THAT MAN IN A SUIT?

HAVE YOU SEEN THAT MAN?

No one, especially not Idris Elba, is allowed to be called "too street" for a movie after Ice Cube. pic.twitter.com/BUqujNsryK

Well, if Idris Elba was in the running before, he’s certainly in the lead now. Social media proved today that Elba is the crowd favorite for the next James Bond movie. In fact, there’s already a Twitter account dedicated to people who want Elba to play Bond.

Update, 8:46 am CT, Sept. 2: On Tuesday night, Idris Elba responded to the controversy by posting one of the week’s many articles on his official Instagram:

The headline of the article read: “007 writer says Idris Elba ‘to street’ to play Bond, quickly apologizes.” Elba wrote the following caption: “Always Keep Smiling!! It takes no energy and never hurts! Learned that from the Street!! #septemberstillloveyou.”

Photo via Tina Franklin/Flickr (CC BY 2.0)