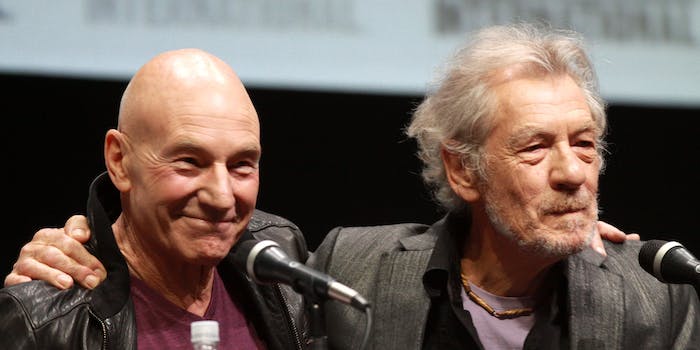 They've fallen right back into place.

Best friends forever Ian McKellen and Patrick Stewart marked their real-life reunion in a manner that can be common with friends.

Stewart and his wife Sunny Ozell came out to support his longtime friend at the London premiere of Mr. Holmes, and the longtime friends shared a kiss on the Red Carpet. Ozell looked on in amusement.

Their IRL shenanigans have been well-documented online for years, with this turning into another page of the friendship scrapbook; McKellen even officiated Stewart’s wedding. But while fans may focus in on the kiss between Stewart and McKellen, that’s not all they managed. The look on their face when they see each other again is priceless and adorable.

Two for the price of one… Patrick Stewart wishing his friend well at Sir Ian McKellen's Mr Holmes premiere. pic.twitter.com/VurrMPN1Mp

The duo were last seen onscreen together in 2014’s X-Men: Days of Future Past, and Stewart has said earlier this year he’d be up for a “buddy comedy” with McKellen. Somebody get them a film together ASAP.