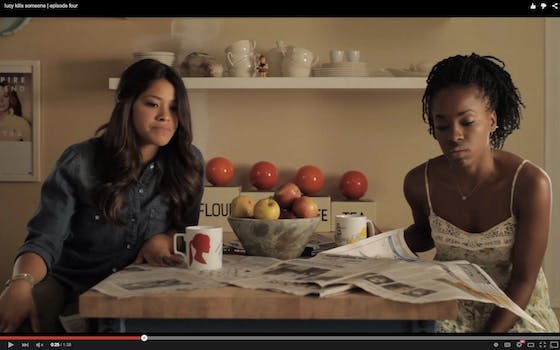 Lucky and Bekka are today’s new and improved version of Jerry and George, having serious discussions in a show about nothing—and everything.

On the surface, I Love Lucy & Bekka is a simple, elegant webseries in which two L.A. women have seemingly off-the-cuff conversations about life, death, crime, and the power of friendship. Truth be told, there’s nothing improvisational or accidental in the glory of this 12-part webseries starring Gina Rodriguez (Bekka) and Kristolyn Lloyd. (Yes, the same Gina Rodriguez who proudly took the stage to win a Golden Globe for her work in TV’s Jane the Virgin. Lloyd is no slouch either, with a long list of credits including the popular soap The Bold and the Beautiful.)

“I met Gina my first year in L.A., which was 2011, through mutual friends,” Lucy & Bekka creator/writer Rachel Holder told the Daily Dot. “She and I both went to NYU, and I met her at a party where she said to me: ‘I heard you write funny things. I want you to write funny things for me.’”

Lucy & Bekka is funny, but in a sophisticated, universally relatable way. The two-minute episodes open with a riff on the classic I Love Lucy theme, but that’s where the similarity between the two shows ends. There are a few installments in which Bekka wears a kerchief à la Lucille Ball, but never in a slapstick, hands-stuck-in-an-assembly-line sort of way. For all but two of the segments, this is a two-character show that represents a powerful narrative between two women juggling careers, social lives, and future aspirations.

Take the episode in which Lucy and Bekka sit around the breakfast table discussing how one would attempt to cover for the other in case either committed a murder. Few webseries boast this sort of clever dialogue that represents the sorts of odd, intimate conversations that take place between friends.

The project is rooted in Holder’s desire to move from public readings in which she performed to audiences of 25 to a larger audience. Prompted to venture into the world of webseries by her friend Jason Wolf, a senior producer for Undercover Boss, Holder raised $5,855 via Kickstarter and shot all 12 episodes in one week during June 2013. Despite the small budget, Holder said her goal was to make the series appear to be somewhat improvised, but every element, including scripting and set design, was carefully orchestrated. The house used for filming, Holder noted, was carefully staged to accurately represent the sort of home Lucy and Bekka—two young working women—could be living in.

The only thing missing from I Love Lucy & Bekka? viewers. The series has a shade over 1,350 subscribers on YouTube. The episodes range from 3,000-5,000 viewers per, which speaks to the plethora of original content available online. Holder is not pushing the future trajectory of her series, as she “wants it to make the rounds and speak for itself.” The writer, now living in New York, says she has season 2 in the palm of her hand, and if a commercial opportunity came up, she is set with a pilot.

But for now, it’s about getting her name and talent out to the masses. “My goal is to get my voice out there,” Holder said. “Getting more people to see my work has always been my purpose.”

Screengrab via I Love Lucy & Bekka/YouTube