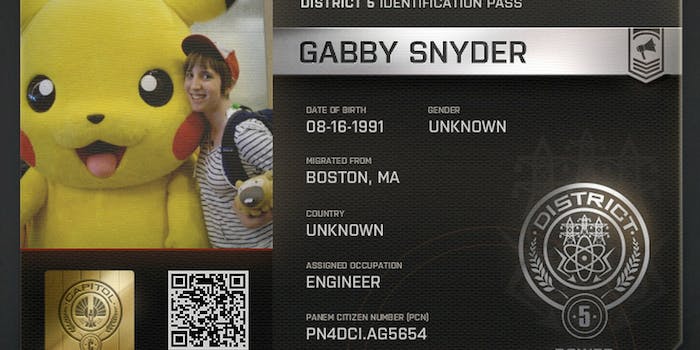 Hungry for the game

The viral marketing campaign for the upcoming Hunger Games movies is so successful that volunteers spend all their time working for free.

When Sarah Fe signed up to join the viral marketing campaign promoting the upcoming movie, Hunger Games, she never imagined she’d be helping to run it.

Every day, Fe updates her Twitter and Facebook followers with the latest news about the Hunger Games. She’s one of twelve users selected as a “Recruiter,” a community manager who moderates and distributes information about the campaign.

Surprisingly, Fe is just fourteen years old. She doesn’t get paid for her work, either.

“It’s kind of affected my school life, because it’s more interesting than learning,” she told the Daily Dot in an email.

A self described “huge Hunger Games books fan,” Fe said that in September she got an email designed to look like it came from the Capitol, aka the dystopian government the rules the world of the Hunger Games.

Now, “I spend 70 percent of my spare time with Capitol stuff,” she said. “One morning I woke up with a message from them saying: ‘Citizen, the capitol has selected you as District 6 Official Recruiter.’ We don’t know how they chose us, or why,” she said.

Since there are twelve fictional districts in the Hunger Games world, there are twelve volunteers managing the campaign. They’re all crazy about the Hunger Games books and hyped for the movie. Some of them have their own fan sites. All of them are very active on Twitter. But the reason these particular fans got picked is likely because they were the first to find out.

Gabby Snyder, the Official District 5 Recruiter, said she found out about the campaign earlier than most on Unfiction, a site that gives visitors the inside scoop on the latest alternate reality games. The Hunger Games viral campaign, with its in depth experience, counts as one.

The 20-year-old music major said she’s read each of the three Hunger Games books “20 to 30 times,” but had never been involved with the community before. She signed up right away.

“I’m glad I’ve had a chance to enter the fandom,” she told the Daily Dot. “Jackie Emerson [an actress in the Hunger Games movie] has even retweeted me/wrote me back a couple of times! It’s pretty amazing.”

Like Fe, Snyder said the job takes up a lot of her time.

“There are days where I start wondering if twitter will flag my account as a spambot,” she said.

The Official District 9 Recruiter, who asked to be called just Uli, thinks she may have been chosen for her frequent tweeting and blogging about the Hunger Games. The 27-year-old professional translator said she doesn’t mind the work because she gets perks.

“We got to see the trailer first on iTunes, after it aired on GMA,” (Good Morning America) she said. “We don’t get any payment or perks from being a recruiter other than a uniform that, however, hasn’t arrived yet.”

All three recruiters the Daily Dot spoke to alluded to a uniform that still hadn’t shown up. It’s just another mystery from their tight-lipped and elusive “employer,” whom none have ever met.

“Whomever is running this campaign is doing a fabulous job of keeping us on our toes,” Snyder said. “I think a lot of people assumed that we knew what was going to happen next, that we were slowly leading them towards the next stage of the game. In reality, I only know what they tweet to the public.”

All three recruiters are overjoyed to be a part of the books and movie about which they’re so enthusiastic. In fact, all three are participating as well as moderating the game. Fe, Snyder and Uli are all running for mayor.

“The story is very interesting because it isn’t just fantasy. It has real aspects in it like the suppression by the Capitol. You can also learn a lot from it, like stay true to your self no matter who or what is thrown at you. And the love triangle makes it even better,” said Fe. “I’ve never been more fascinated by a book.”