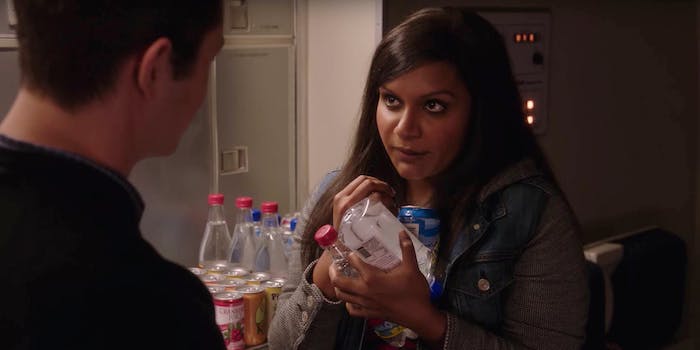 'We’ve literally put the TV back in the TV.'

Hulu plans to bring live TV to its service this year, and it announced the launch of new season pickups of original programming The Mindy Project and The Path at the platform’s 2016 NewFront event in New York.

“We moved to Hulu a year ago, and at first I was a little nervous,” said Mindy Kaling, creator and star of The Mindy Project. But her fears were quickly assuaged: “The streaming life is sweet. On Hulu I’ve been able to make the show I’ve always wanted to make, where I eat sour straws by the yard and make out with hot guys under good lighting.”

Kaling’s show gets a fifth season, while The Path will get a second. Hulu also announced the launch of a documentary films division, bolstered by an exclusive acquisition of The Beatles: Eight Days a Week from Ron Howard; showcased a preview of upcoming series Shut Eye; and brought Hugh Laurie out to talk about his new series, Chance.

“[Hulu] has thrown their shoulder against the wheel with all their might,” said Laurie of the company backing the series about a San Francisco-based forensic neuropsychiatrist, which received a two-season deal.

Hulu will also lean into the election cycle with a new special from Triumph, the Insult Comic Dog, and it’s pushing into emerging technology with a VR partnership with LiveNation. Hulu launched its VR product in March, and will soon give exclusive, 360-degree access to major tours.

But original programming wasn’t the biggest buzz: Hulu’s plan to launch a live TV streaming service for cord-cutters seeking an alternative to traditional cable packages is raising eyebrows online and off. While Hulu wasn’t forthcoming on specific details of the Live push, it’s rumored to cost $40 per month and hit in 2017.

“We’ve literally put the TV back in the TV.”

“We’ve literally put the TV back in the TV,” said CEO Mike Hopkins.

Hulu saw a 30 percent growth in subscribers to hit 12 million in May 2016. Hulu benefits from the fact that its catalog is bolstered by programming from the wider traditional television catalog, and while it showcased its own talent from the originals slate, the event was hosted by Comedy Central’s Broad City stars Abbi Jacobson and Ilana Glazer (their series is streaming in its entirety on Hulu). Jacobson welcomed everyone not to “Newfronts” but to “upfronts”—the term for the non-digital event proliferated by traditional networks—to murmurs in the room, but the language is one that Hulu embraced across the presentation. It speaks to Hulu’s view that TV is new media.

“It doesn’t matter what our media age is; it matters who you’re trying to reach,” said SVP of Advertising Sales Peter Naylor, noting that the company’s goal is to market to every demographic. “I think it’s time we start asking new questions in new media.”