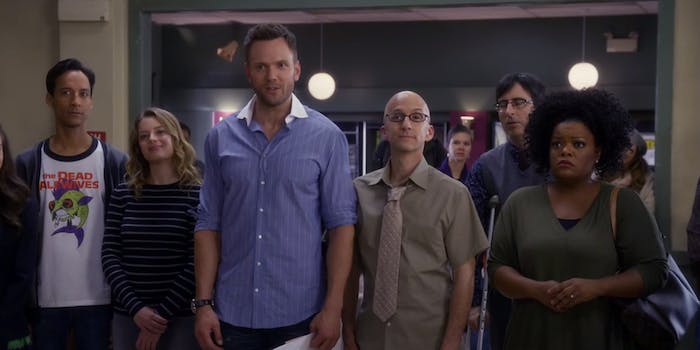 #sixseasonsandamovie may still be possible.

There may be hope for a sixth season of Community after all.

Almost three weeks after NBC canceled the cult comedy, Hulu is in talks with Sony Pictures Television, the main studio that produces the show, to bring more original Community episodes to Hulu Plus.

It’s not a confirmation that there will be a sixth season on Hulu by any means, but both Hulu and Sony appear to be interested in the prospect of bringing the show back. The plan would likely include one more 13-episode season with creator Dan Harmon running things again.

Hulu owns the rights to stream Community digitally, so reviving the show there logically makes sense; it’s something people have speculated about since the show was canceled.

If a deal is made, it would be a bold statement for Hulu. The streaming service has made its own content before—although it’s never been as successful as Netflix’s original content—but it has never rescued a show. Community would by far be the biggest name in its lineup, and the move would be comparable to Netflix reviving Arrested Development.

Plus, the rabid fans who rallied for “six seasons and a movie” would be one step closer to fulfilling that cry.

Harmon said he was open to making a sixth season of Community (after initially appearing “eh” right after cancellation), but he was also OK if it never happened. Either way, it was going to be a long process, most of which would be out of his hands.

“I’m not going to be the guy who recancels cancelled Community,” he said.