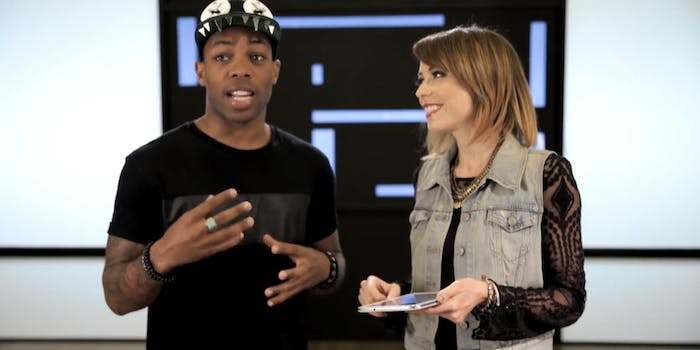 VH1 and 'What's Trending' partner for 'Huge on the Tube' video series.

For some YouTubers, a single video was all it took to catapult them to stardom. A new digital series from VH1 and What’s Trending aims to capture the stories of creators and what made them Huge on the Tube.

“We approach a YouTuber that has not just built a career, but definitely had one video that threw them in the spotlight,” series host Shira Lazar told the Daily Dot. “That’s a foundation for telling a bigger story. That one video is a bit of the entry way for it.”

The series will dig deeper into the success of various YouTube celebrities, similar to VH1’s Behind The Music franchise. The first episode features singer and dancer Todrick Hall, who explains the origin of his breakthrough Cinderonce video.

“I’d never met [Todrick] before, but there’s camaraderie when you see these people because they’re all connected to each other in some way or another,” Lazar said. “He’s such an outrageous personality. He taught me how to dance! To think about how excited he still is about what he does. A lot of people are doing this day in and day out on no budget, so for some of these creators to still be as enthusiastic as they were when they put up their first video. People get excited by excitement, they feed off of it.”

“Even though I was a Canadian, coming to the states I remember watching MTV and VH1 was a big deal, watching Pop Up Video and Behind The Music,” Lazar said. “I was part of a generation that grew up with networks like VH1, but I think that as things are shifting to digital and connecting to the next generation of viewers, we came together. VH1 was interested in YouTube culture and the world around that.”

For Lazar, the VH1 partnership is just the first in further expanding What’s Trending in new ways for 2015.

“People look at us like we’re a show, but we’re developing beyond that,” she said. “We’re a dot com, we have social streams, and this is a way to get to a co-production with a partner that aligns with our philosophies, but allowed us to try a new format and take advantage of everything we love and are passionate about.”

Future stars on the program will include Jenna Marbles, Grace Helbig, and Michelle Phan. The 12-episode series will roll out daily on VH1’s YouTube channel.