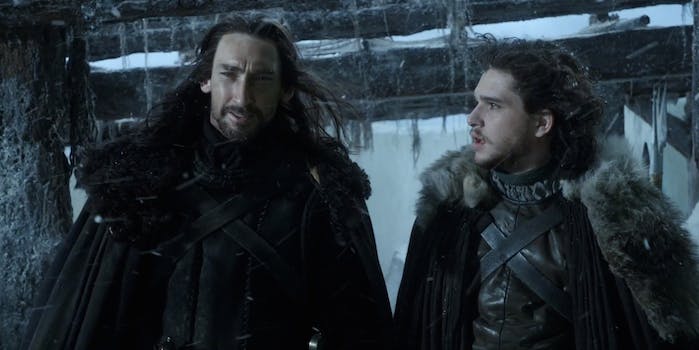 Get ready for your Sunday nights to be filled once more with sword fights, dragons, and a lot of ice. The sixth season of Game of Thrones is set to debut April 24 on HBO. If you don’t have a full-fledged HBO cable package, there are a number of lower-cost options to watch the new season of GoT. Sadly, all of them involve HBO in some form or another. If you haven’t sprung for HBO yet through your cable service provider, chances are you won’t want to now. So what’s left to do?

Here are all the options to watch season 6 of the Game of Thrones online:

Springing for HBO’s less expensive, standalone option, HBO Now, isn’t exactly dirt cheap: The service costs $14.99 per month. Still, it’s cheaper than HBO in its conventional format and gives you access to shows on your smartphone, tablet, and laptop. You’ll also get access to sweet vintage HBO content as well.

2) iTunes, Amazon, or another streaming service

If you prefer to go another route, HBO Now is available as an add-on option on iTunes and Amazon. It’s essentially the same as signing up on the HBO Now site directly, but if you plan on watching Game of Thrones on an Apple or Amazon device like Fire TV, it’ll be slightly easier for setup.

You can also watch Game of Thrones if you have a subscription through Sling TV and want to pay the extra $15 per month to add HBO.

3) Get your friends involved

Much like Netflix, HBO Now has no limit on the number of devices you can use under a single account. Meaning that if you have a friend with HBO Now, you can use their password to watch GoT on your own. If you don’t want to feel like a moocher, here’s another method: