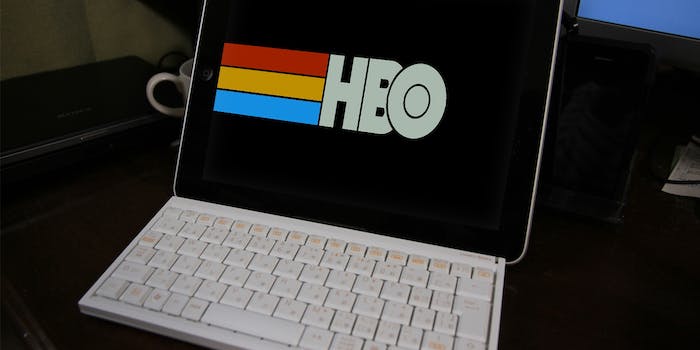 Here’s how to set up HBO Now

If you want to get everything set up in time for your Game of Thrones/Veep/Silicon Valley triple-header watch party on Sunday, here’s what you need to do.

1) Boot up your Apple TV and open the app

You’ll see a new HBO Now app in the top row of your icons on the home screen.

2) Open the app and enter your email address

You can either log in to an existing HBO account or start a new one. After that, you’ll need to agree to the terms of service, which, let’s be honest, you’re way too excited to read.

You’ll get this in your inbox shortly thereafter: 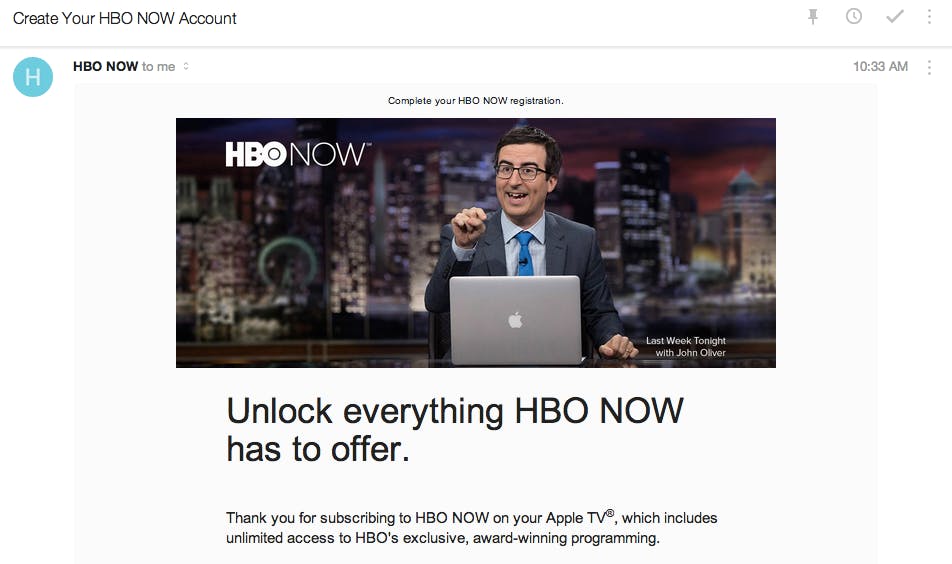 This takes you to a screen that details the terms of the service: Your first month is free, and your iTunes account will be charged $14.99 a month automatically after that. If you want to bail, simply turn off auto-renewal on your computer or other Apple product.

The HBO Now homepage is now at your fingertips.

You’re not entirely out of luck if you don’t have an Apple TV. Any ol’ computer or iOS device will do.

The free trial option is still available, or you can log in to an existing HBO Go account. 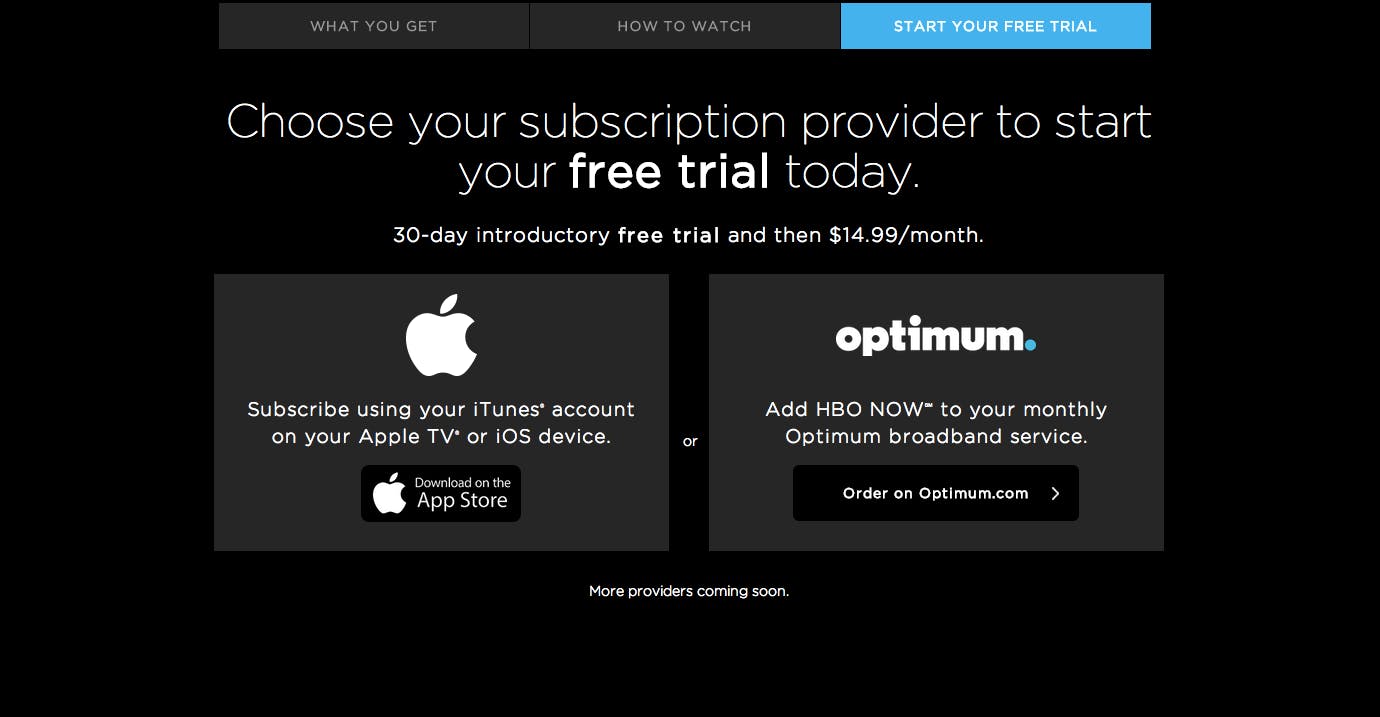 If you have an Apple product, you should be good to go with the instructions above. In theory, you’ll simply download through the App Store on your laptop or iPad, and off you go. As of right now, unfortunately, the App Store isn’t showing HBO Now as available in the U.S. 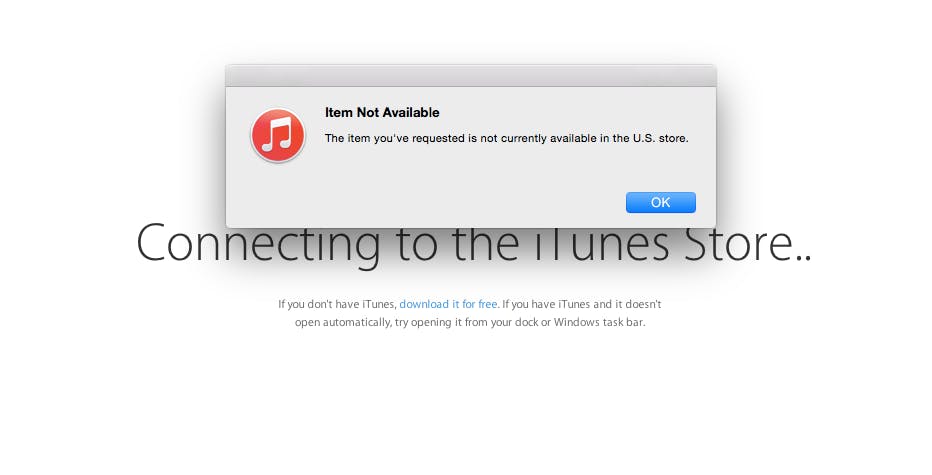 If you run into that error, try manually searching for HBO Now in the store; the iPhone and iPad apps came up for me. 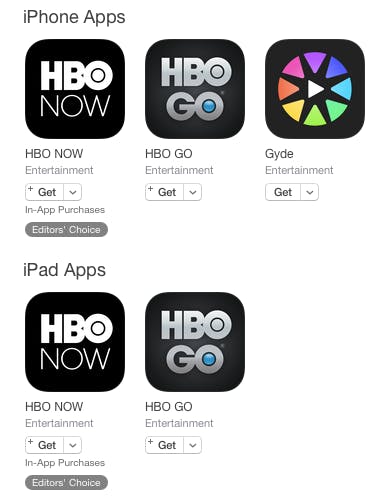 If you have Optimum broadband (which you probably don’t, sorry), you can add the service to your account there. Stay tuned for support for more providers at a later date.

Once you’ve launched, you’ll see a scrolling bar of some of the channel’s most popular offerings at the top: Jersey Boys, Going Clear, Game of Thrones, and The Jinx were top of the charts this morning. 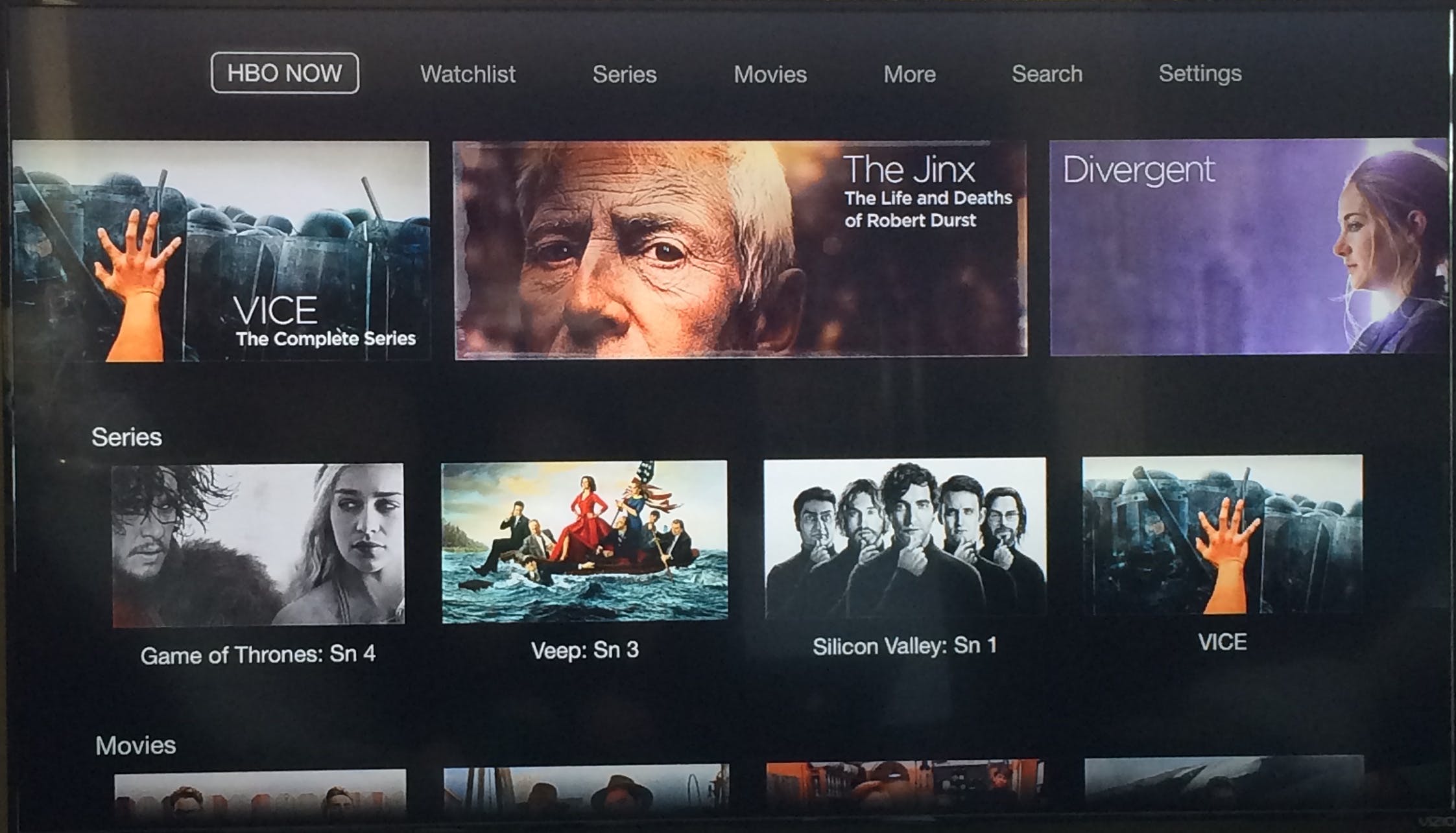 All told, the Apple TV app works a bit like you’d expect Netflix or Hulu or any other streaming service to work. You can search the service, sort by series, add shows to your watchlist, and even configure parental controls in the top menu bar.

I think we all know you’re heading straight into a Game of Thrones marathon, though. You can resume exploring the app on April 13, after all, with 24 days on your free trial to spare.

Photo via bm.iphone/Flickr (CC BY 2.0) | Remix by Fernando Alfonso III