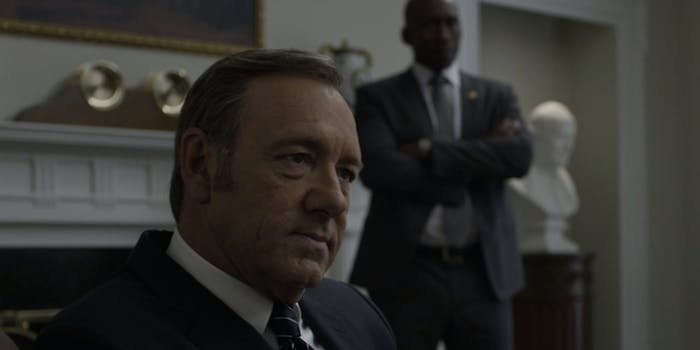 7 little-known facts about ‘House of Cards’

You'll never look at the Oval Office the same way.

Since season three of Netflix‘s flagship original series House of Cards is now available for you to binge, we figured it’s the perfect time to explore what’s going on behind the scenes of the Oval Office (a.k.a. a room in a giant Maryland warehouse) and bring you some little-known facts about this vicious political series starring Kevin Spacey and Robin Wright.

1) The Oval Office is in a warehouse

As alluded to above, House of Cards production took place in an over 300,000-square-foot warehouse in Joppa, Maryland. In the warehouse exists sets for the Oval Office, House of Congress, various politicians’ offices, and some fancy hotel rooms.

The guy actually has some political experience. In addition to co-writing The Ides of March starring George Clooney (which is actually based on a play written by Willimon), the House of Cards showrunner has worked for politicians in real life, including Howard Dean, Charles Schumer, and Hillary Clinton, as noted by Mental Floss.

3) Kevin Spacey acts like Frank Underwood in his other work

Ever seen the Kevin Spacey flick Horrible Bosses? If you have, you may recall that Spacey as Dave Harkin and his employee (Jason Bateman) play out a scene nearly identical to one that takes place between Frank Underwood and Peter Russo (played by Corey Stoll) in season one of House of Cards. In both scenes, Spacey offers the other character a drink, and when they ask if Spacey’s going to have one, he answers that it’s too early to be drinking. Dirty move, that is.

That bandage Underwood wears after he burns his hand on hot coffee in episode nine? It was there to cover up a real burn on Spacey’s hand, one he got from holding a burning flag during a promotional House of Cards shoot, according to Mashable.

5) House of Cards shares a diner with The Wire

Various House of Cards scenes were shot in the same diner that was often used in the production of The Wire. In the former, Doug Stamper (Michael Kelly’s character) uses the place for his more secretive meetings.