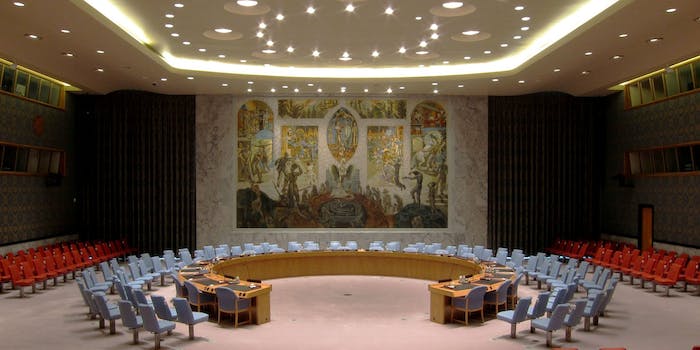 Russia lays down hammer and sickle on ‘House of Cards’ filming in the U.N.

House of Cards may be the toast of Netflix, but it hasn’t exactly won over the Russian government.

Despite an assist from the U.N. Secretary-General’s office and the British delegation to the U.N., Vladimir Putin’s government couldn’t be persuaded to open the doors of the Security Council to the production. According to emails obtained by Foreign Policy, the Russian delegation was the most vocal holdout among the members of the various U.N. delegations Tuesday night as the deadline drew near to reject or approve House of Cards‘ request to film in the chamber room.

“Upon thorough reflection, we are objecting to the proposed filming in the Security Council,” Russian delegate Mikael Agasandyan wrote in an email to council members late Tuesday afternoon.

In other words, although the production team was planning to film after normal business hours, world security has no regular operating hours, as far as Russia is concerned.

The U.N. has recently been courting Hollywood to help shape its image by featuring notable U.N. spots in their films, such as the one they originally denied to Alfred Hitchcock when he approached them to film North by Northwest in 1959. Hitchcock wanted to film a murder in the U.N.’s North Delegates Lounge; the U.N. said no. Despite the relative merits of allowing its chambers to be featured in an iconic film masterpiece, the U.N. is apparently still wary about associating with less-than-positive portrayals of government and politics.

Bo Shen, a member of the Chinese delegation, replied to concur with Agasandyan and the wisdom of the Russian delegation.

“I think Mikael’s argument is reasonable,” he wrote, citing the need for an advanced look at the script before the U.N. gets in over its head:

“[The Chinese delegates] think council members should have a rough idea on scripts for those episodes which are relating to our work. DPI [The U.N. Department of Public Information] judged them to be appropriate but could not represent views of council members. Based on that, we regard the current information are insufficient before making a decision by the council.”

In the past the U.N. has opened its chamber doors to various entertainers and photographers. Annie Liebowitz did a photoshoot of former U.S. Ambassador Susan Rice for Vogue. But the grittier, darker House of Cards may not be the easiest sell for the General Assembly, which is, let’s face it, probably more a house of diplomats and face-savers than a house of machiavellian international intrigue.

Still, we do have two reasons to be grateful for the stalled production kerfuffle: We now have an exciting glimpse into what the next season of House of Cards will hold. Who doesn’t love the image of Kevin Spacey sharply rapping his knuckles on a U.N. podium?

And even better, we now know that the U.N. Security Council chats to each other about TV shows over email, just like the rest of us. Let the fanfiction commence.